Projekt Revolution 2003 was Linkin Park's second edition of Projekt Revolution and their second North American tour for Meteora. The tour ran from April 8th and ended on April 30th, originally supposed to compose of seventeen shows. However, five shows of the tour were cancelled, resulting in the tour consisting of only twelve shows ultimately.

Before the tour the band embarked on their first tour in support of Meteora entitled the LP Underground Tour. The tour featured shows in both Europe and The United States and began on February 23rd in Milano, IT. The tour ended on March 25th in Los Angeles, CA. The tour featured the live debuts of a lot of songs off of Meteora and the band played the entire show for free essentially, because members of the LP Underground could attend the shows for free. However, with some shows, the turnout wasn't as big as the band had expected, resulting in tickets going on sale for non-LP Underground members who wanted to come. The tour also featured smaller style venues for the band.

Since the first show of the tour in Rochester, NY was cancelled due to a bad snow storm, the first show of the tour was in University Park, PA. The official statement by the band for the cancellation of the Rochester, NY date was as follows, "At present the LINKIN PARK crew has assembled in Reading, PA to complete rehearsals and as the day progresses it is becoming apparent that the members of the band and crew that are still due to arrive are not going to make it to either the rehearsal or to the Rochester show. Rather than risk health and well being of the entourage due to the inclement weather, we've decided to move the show. LINKIN PARK regrets the inconvenience to their fans and looks forward to seeing them on July 22nd. The next show will play as scheduled at The Bryce Jordan Center in State College, PA on April 9th."

The show in Evansville, IN after the University Park, PA show was also cancelled, due to Chester developing a bad throat infection. The official statement for the cancellation was as follows, "Regretfully Linkin Park must postpone tonight’s Projekt Revolution show in Evansville, IN due to Chester developing a very bad throat infection. Please be sure to check back here on projektrevolution.com for further updates for the next couple of shows as we will be reevaluating Chester’s condition daily."

Then band then played eleven shows in a row after the cancelled date and finished up the tour in Rapid City, SD. There were originally three dates planned after the Rapid City, SD show, but they were all cancelled due to a scheduling conflict with the music video for Faint, which would be the band's upcoming single.

The statement released by Linkin Park was as follows, "Due to a scheduling conflict with Linkin Park’s video shoot for their second Meteora single, they had to postpone two of the Projekt Revolution tour dates- ValleyCenter, KS and Council Bluffs, IA. They plan to reschedule both these tour dates this summer- so stay tuned for more information."

What was supposed to be the final show of the tour in North Little Rock, AR was also cancelled, but strangely, the show was never announced in the official statement for the cancellation of the remaining dates of the tour and disappeared from the itinerary of the tour completely. It is unknown why this happened.

The setlist for the tour was pretty unique. Taking the sixteen song setlist used on the LP Underground Tour, Linkin Park extended it by two songs to eighteen. By Myself was added in after Points Of Authority. Most notably, P5hng Me A*Wy from Reanimation received its live debut as well as Nobody's Listening. Mike in 2002 said that he wanted to perform some of the Reanimation songs live, and P5hng Me A*Wy was the first full Reanimation song the band added to their setlist.

After the first show, the setlist order changed slightly for the rest of the tour. Runaway, which was down near the end of the set, was moved up after Points Of Authority and By Myself was moved down.

Christian Lindskog of Blindside came out on P5hng Me A*Wy, as well as One Step Closer.

Xzibit came out on Nobody's Listening and rapped a verse of his song My Name over an extended version of the song. Since

Chad Gray of Mudvayne came out on One Step Closer.

Since we do not have the set information for each stop of the tour, it is impossible to know exactly how many times these guests came out with the band.

At the last show in Rapid City, SD, Linkin Park to begin the encore break performed a short instrumental jam of Black Sabbath's Iron Man. Chester imitated Ozzy yelling "YOU'RE FUCKIN' NUMBER ONE!!!" as Ozzy often yelled at the crowd. This is the only time the band ever jammed Iron Man in any form. 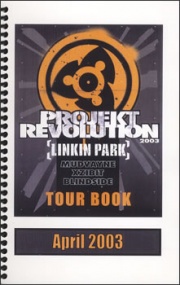