The tour consisted of nineteen shows across the United States from January 26th to February 24th. During this period the band also played a radio show and a festival show.

Before Street Soldiers Tour kicked off in January the band came fresh off of a short European Tour earlier that month. Linkin Park played in Europe for the first time, traveling to France, Germany and England. This included Linkin Park's first TV appearance at the Canal+ show Nulle Part Ailleurs and the BBC Radio One Evening Session. The Kerrang! show at the Kings College Student Union in London on January 11th is famous for being Linkin Park's first video webcast and the first professional recording of a full-length international show. An internal live DVD of the show from Warner Bros. Records was ultimately leaked online.

After the European shows, Linkin Park made their live debut on American television with a performance at Late Night with Conan O'Brien on January 16th.

The tour kicked off in Seattle, WA on January 26th and wrapped up in Providence, RI on February 24th. The first show saw the live debuts of "High Voltage" and "Pushing Me Away". "Crawling" was debuted earlier in the day when the band played a 107.7 The End "Endsession" performance for radio contest winners before the headlining show later that night. The tour took place exclusively in the United States, without any stops in Canada. On February 3rd the band played at the Dragon Festival in San Bernardino, CA with tour mates Taproot and Alien Ant Farm. The setlist was consistent throughout the tour, being composed of thirteen songs.

The band did a "roadie for a day" experience with a fan named Brad at the Pittsburgh, PA stop of the tour on February 15th.[1]

Ryu and Tak of Styles Of Beyond came out on "Points Of Authority" many times on the tour with the band while Stephen Richards of Taproot came out on "A Place For My Head".

When Alien Ant Farm joined the tour to replace Styles Of Beyond, Chester started performing "Attitude" with them.[2]

Mike Shinoda had been good friends with Styles Of Beyond ever since he met the group in the mid-90's,[3] so when Linkin Park embarked on their first headlining tour in 2001, they took Styles Of Beyond with them. Cheapshot explained that tour was the catalyst for their song "Style Tips" being featured on the Knockout Kings 2002 videogame. "When we went on tour with Linkin Park, Joe Hahn introduced me to a few people at EA Sports. I took home their information and sent out some material when we got back and BOOM!! We got a track on Knockout Kings 2002."[4]

Styles Of Beyond was later replaced with Alien Ant Farm in the line-up. A tour diary by Mike from February 8th reads, "Styles of Beyond has finished their time on our tour, and we were all sad to see them go home. they are really nice guys, and put on an excellent show. i hear they're going to go home to save up some money and showcase for some more record labels, as they are as of yet an unsigned act."[5]

Linkin Park met Taproot through their former vocalist Mark Wakefield who was Taproot's manager at the time. Stephen Richards explained, "Well our manager used to be in Linkin Park years and years ago So we befriended the LP guys while we were working on our debut record GIFT"[6]

The Fillmore 2001 DVD was filmed during the Street Soldiers Tour in San Francisco, California on January 30, 2001. A tour diary by Brad from January 30th reads, "Hey, what's up people! How's the new site! I hope you guys are stoked because we've been working really hard to get this thing up. We always talk about being dedicated to our web presence, so we're "putting our money where our mouth is." Right now I'm sitting at the world-famous Filmore in San Francisco as Taproot are soundchecking Weezer's "Say It Ain't So." The club is video-taping the show tonight so I hope we don't suck. We've been really busy these first few days of the tour, but the shows have been going off hard. Seattle, Portland, and Sacto were big sweaty pits of energy. Styles of Beyond are unbelievably sweet and Taproot have been ruling it every night. We can't wait to see everybody across the great U.S. of A. Thank you tremendously for your support and dedication. Mostly, enjoy the new site. Much Respect, Big Bad Brad"[5]

A 21-minutes TV documentary was originally broadcasted in 2001 and included interviews with the band, crew and fans as well as full live performances of "With You" and "One Step Closer" and short clips of "Pushing Me Away", "And One", "Runaway", "Forgotten", "Points Of Authority" (featuring Ryu and Tak from Styles Of Beyond) and "By Myself". "A Place For My Head" (not included in the broadcast) features Stephen Richards from Taproot. The full show was released as part of the Hybrid Theory (20th Anniversary Edition) "Super Deluxe" box set.

As part of both the celebrations for the anniversary of Hybrid Theory, as well as a way to raise money for touring artists who have lost income due to coronavirus, Linkin Park livestreamed the previously-unseen San Diego concert from February 1st with commentaries by Joe, Dave and Mike on March 25, 2020.[7] A 30-second snippet of "With You" was previously released in the "Crawling" DVD single and footage from the show was used in the "Points Of Authority" music video. During the stream, fans were asked to consider supporting the Roadie Rescue Campaign.[8]

Following the stream, the band started posting each song in full on YouTube without commentaries. Two songs were released each Monday and Thursday until the full show was up. The first videos were posted on April 6th.[9] The show intro was removed from "With You".

A video of "Crawling" recorded live at the Dragon Festival at the National Orange Events Center in San Bernadino, California on February 23rd was released in the United Kingdom in April 2001. The audio was dubbed over with the album version and crowd noise was mixed in. Footage that would later appear on the Frat Party At The Pankake Festival DVD as a multi-angle video. A video of "Points Of Authority" from the show was also included in the DVD as an easter egg. Mike explained, "there are two videos for POA... both are live one video (POA) is a compilation of all kinds of stuff from the last year another video is a HIDDEN TREAT ON THE DVD".[10] "Papercut", "Points Of Authority", "Crawling" and "One Step Closer" from Dragon Festival with the original live audio were broadcasted by Sound Advice TV.

For the Las Vegas, NV show on February 2nd, two 24-hour video webcasts were featured on HOB.com. The first on March 7th and the second on March 29th, both beginning at 12:00 PM PST. A bootleg CD from this show exists under the title Las Vegas Theory. 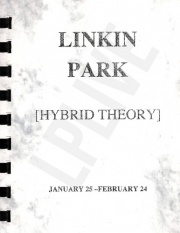