Meteora is American rock band Linkin Park's second studio album, released on March 25, 2003 through Warner Bros. Records. Five official singles were released from Meteora, including "Somewhere I Belong", "Faint", "Numb", "From The Inside", and "Breaking The Habit". "Lying From You" was released as a promotional single in 2004.

Meteora is the band's second album. Many view it as a "sequel" to Hybrid Theory, in that the same nu-metal sound is carried on from the previous album. Between the end of the Hybrid Theory touring cycle and the release of Meteora, the band took time to prepare and release their first remix album, Reanimation.

The name Meteora was derived from a rock formation in Greece, which has a monastery perched on top of it. Mike explained: "'Meteora' was a word that caught my attention because it sounded huge... In the same way Linkin Park doesn't mean the park, but the band, Meteora doesn't mean the rock formation, it means what this album sounds like." Chester continued his statement, "It's got this otherworldly vibe about it, it had this really great energy, and I wanted to have a record that lived up to that energy."

About how the artwork on the album came together, Mike said, "Just to be clear about what I kind of do as far as the artwork goes, usually on the albums, I work with another designer because it's a lot of work putting together an album artwork. I know our album had a really lengthy booklet with it. We'll usually just kinda throw some ideas together and get things started. For Meteora, we had a whole art day where Joe and I and Frank, who was our art director, then we invited out a graffiti artist named Delta, he's actually from Europe. It was a pretty big deal to get him out and get him to work with us. We had a lot of fun and we did a whole day where we just spraypainted and painted these gigantic walls. Things like that are really out of the ordinary and they're really special when we can make them happen. We're hoping to do some more things like that in the future."[2] Boris Tellegen (aka Delta) is also the person on cover of the album.[3]

Frank Maddocks explained how the wall with portraits of the band members came together: "Here’s a photo of one of the large walls we all painted for the album packaging. Original portraits by James Minchin Xeroxed and wheat pasted to wall. Then photographed again."[4] The picture was also used as the cover for the "From The Inside" single.

Meteora was recorded from April 2002 to December 2002 at NRG Studios in North Hollywood, California. The writing process for the album began in the Summer of 2001 during the Ozzfest Tour, where the band worked in the back of their tour bus. The band mainly recorded samples and guitar from their bus. One of the songs worked on in the bus was "Somewhere I Belong". The intro was Chester performing a chord progression on an acoustic guitar. Mike thought it sounded too "folky", so he and Joe reversed the sample, effected it, and cut it into parts to maintain the chord progression. 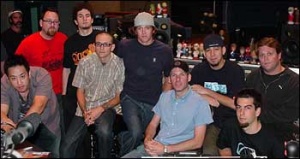 Pre-production began in early 2002, after Projekt Revolution 2002. During this period, the band tried to get each song they wanted to work on as polished as possible before heading to the studio. They worked from Mike's home studio, starting work on songs including "From The Inside" and "Figure.09". Right after putting the finishing touches on Reanimation, the band headed to the studio with producer Don Gilmore. Before the band was in the studio, they had demos recorded for most of the songs, so they had general work frames set out for the new songs. The band tracked each part separately, in a specific order: first, Rob recorded drums, then, Brad recorded guitar, then Phoenix recorded bass, then Joe did his scratches, then vocals recorded by Mike and Chester. By October 2002, all the drum parts had been recorded and guitar tracking began. Brad took risks with his guitar tones, rather than focussing on a specific tone like he did in Hybrid Theory. By the end of October, bass recording had begun. One month before the deadline, in November 2002, scratching, additional instrument, and vocal tracking began. During this point, the strings for "Breaking The Habit" were recorded. Mike, talking about the song, said, "This is a song I've been wanting to write for five or six years." After hearing Mike perform the strings on the keyboard, Don Gilmore suggested a live orchestra, which ultimately made the final cut. Chester returned to the studio at the end of the month. In December 2002, then band began mixing in New York City, and tragedy struck: Chester became sick and could not sing while vocals still needed to be recorded. This resulted in Chester having to finish recording vocals in New York City while the band was mixing the album, so that they could meet their deadlines. Had they not recorded then, the album would have been delayed several months, or songs would have been scrapped. Mixing was done by Andy Wallace.

The band had an art day in Los Angeles, where the album art was created. The band brought out street artist Boris "Delta" Tellegen to create many spraypaint pieces. Mike described his work as "interesting, cubist satellites". The art was a depiction of where the album was at on that particular day. Each member kept painting over other works, and it at all became a cohesive work of art riddled with sketches and random words everywhere. The album cover is a picture taken by photographer James Minchin of Delta working with spraypaint. The band had a photoshoot on October 29, 2002 at the Ambassador Hotel in Los Angeles, CA, where a majority of the band pictures for the album were taken. Phoenix claimed, "The photoshoot... was really eerie. There's just this tension because this place is just... nasty." He continued, "Gradually as we were there, you hear more and more stories that 'such-and-such was assassinated and they pulled the body into this kitchen you're taking pictures in."

While recording the album, Linkin Park whittled down 80 songs to 13. "It's funny because with 'Meteora,' we probably wrote 80 different songs in the process of doing that record. We wrote maybe 40 and trashed all of it with the exception of a couple small ideas that we still liked and we moved on from there," Phoenix said.[6] In total, the band recorded 15 full songs[7] for the album, with 12 of them making the final cut. Other recorded tracks include "A.06" (and the longer version entitled "A-Six"), Pepper, Cumulus, Ominous, Halo, Unfortunate, and Rhinocerous.

The album was largely a continuation of the nu-metal style found in the previous album, Hybrid Theory, but did present several new, more experimental elements. "Breaking The Habit" and "Faint" both feature prominent string sections, and "Nobody's Listening" is largely driven by a shakuhachi, a Japanese flute made of bamboo.

When talking about the album, Mike said "We wanted to experiment and step outside of the box; so we brought in and used some live strings, piano. We used a traditional Japanese flute, which is called shakuhachi. We played with time signatures. There's a song in 6/8 – we've never done a song in 6/8 before, different tempos. Obviously, songs like "Breaking the Habit" and "Faint" are faster than any songs we've ever written and "Easier to Run" is much slower."[8]

Chester (LPU chat April 2003): "I think the idea of blending songs came from Reanimation we really loved the way the album flowed together by blending interludes. We really want to make albums that flow from beginning to end so we wanted to introduce that to our records."[9]

Meteora was issued on aqua blue vinyl for the Black Friday version of Record Store Day on November 27, 2020. It was limited to 3000 copies.[10]

Meteora - Live Around The World