After the Meteora International Tour in Europe and Asia in June, Linkin Park returned home to Los Angeles to prepare for Projekt Revolution. During the time in between tours, Linkin Park collaborated with Jay-Z to create which eventually became ''Collision Course'' and they also performed a show in West Hollywood, CA on July 17th to perform the Collision Course songs, as well as some other Linkin Park songs.

The show was filmed and was released as part of the Collision Course release that came out in late 2004. The band actually had to perform the Collision Course songs twice, because according to Mike Shinoda, "MTV fucked up the lighting" during the original take. Tickets for the show were given to the Jay-Z fanbase and the LP Underground. The band did a poll on the LP Underground asking fans what other genres of music they like. Fans that answered hip-hop/rap were chosen to attend the show.

The band played two different sets during the course of the tour. A Place For My Head was not played at on the first four shows of the tour but was added in on the Mansfield, MA date and remained in the set after that. Interestingly, the song was also not in the setlist to start the June 2004 tour either, but was added in there too after one show.

The band continued to play Wish, the Nine Inch Nails cover, that they debuted on the Meteora International Tour in June. Mike had this to say about playing the song, taken from an interview during Projekt Revolution 2004. "When we decided to play it, we knew most of the young kids in the crowd wouldn't know it, and maybe they need to hear it. Also, it's really fast, so even the kids that are into it don't know how to physically move to it, which is kind of funny to watch."

At the Cincinnati, OH date of the tour, the very first show of the tour, the band took the stage forty minutes late because of issues following Snoop Dogg's set, also delaying Korn by an hour. However, LP performed a full set and went over curfew by at least fifteen minutes. At the Noblesville, IN date of the tour, local radio station X103 in Indianapolis, IN used the show for their 10th annual "X-Fest". Instead of booking their own show, they wanted to use Projekt Revolution 2004.

Snoop Dogg came out on the Hip-Hop Medley to sing a part of his song Gin And Juice over the Hip-Hop Medley for the first time at the Wantagh, NY date of the tour, but he had difficulties with his microphone and it didn't go off as planned. Snoop Dogg eventually came out again later in the tour on the Greenwood Village, CO date of the tour to perform it again and pulled it off.

Jay-Z made a surprise appearance at the Holmdel, NJ date of the tour and performed three songs off of Collision Course with the band. It is unknown if the set available is 100% correct but he performed Dirt Off Your Shoulder/Lying From You, Big Pimpin'/Papercut and Jigga What/Faint with the band, and maybe even part of Points Of Authority/99 Problems/One Step Closer.

Less Than Jake confirmed during the first show of the tour in Cincinnati, OH that Limp Bizkit was asked to play first on the main stage of the tour, but they declined, so the band then asked Less Than Jake. Fred Durst of Limp Bizkit apparently didn't want to open the Main Stage. Taken from an interview with MTV in March of 2004, Chester had this to say about choosing the bands on the bill, "Right off the bat, it was us and Korn and Snoop. We made the phone calls and it was that simple." Snoop Dogg also had this to say about touring with the band, taken from the same MTV interview, "You know me, I like to make history. And this is history to me. You've got the best of the best stepping up to the stage to do what we do best: give people something special for the summertime. That's when everyone wants to have a good time, everyone's out of school, so why not come and have fun with the best."

Lastly, Chester said this about the bands on the tour, including Linkin Park. "I hope they put on really great shows. And we're gonna do the same. I want kids to go away going, "That was the best show I've ever seen". Not Such and such band was great."

Korn released a live track of their cover of Another Brick On The Wall from the Maryland Heights, MO date of the tour on their Live & Rare CD in 2006.

The Used released a small video of Bert McCracken performing Faint with the band at an unknown show on their DVD entitled Berth that came out in 2007. The DVD also featured some random footage of the band hanging out on the tour, as well as a small part of one of their songs performed on the tour.

Before the tour kicked off, the band released a CD entitled the Projekt Revolution 2004 Sampler which featured tracks by a lot of the bands on the tour, as well as some other bands that weren't featured on the tour. The idea of the CD was to promote the tour and get fans interested in the music that they will be seeing some of on the tour. It's unknown whether the bands that included on the CD that weren't featured were considerations for the tour at one point, or if they declined the tour offer, etc. The band released a track on this CD, Breaking The Habit from their show in Adenau, RP in June of 2004, which later was featured again on the LP Underground 4 CD released by the band. The version on the Projekt Revolution 2004 Sampler CD had some slightly different editing than the one featured on the LP Underground 4 CD and it's unknown whether the mix is identical or not.

Snoop Dogg used the CD to release a rock oriented song that he was originally going to release with one of his bands at the time called The Snoopadelics. The Snoopadelics never released an album and this is the only known track from the group in existence, even though the track was listed under Snoop Dogg on the CD. 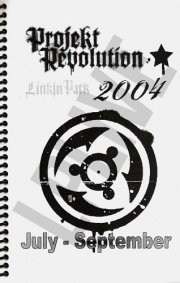