Linkin Park ended 2003 by playing the KROQ Almost Acoustic Christmas in Universal City, CA. The band then took a few weeks off and got ready for the Meteora North American Tour.

During the LPTV episode for the tour, it revealed that the rehearsal for the tour took place in Washington, D.C. Phoenix commented about the rehearsal during the LPTV episode, saying, "I think it's probably 1:30. This is what we call an all nighter. Just when I thought I was done with them when finishing school and now we're doing all nighters for shows."

The band used one setlist for the entire tour, with P5hng Me A*Wy being dropped at two of the shows for an unknown reason. The 2003 setlists all opened with Don't Stay, so Linkin Park went back to their Hybrid Theory-era opener for this tour, choosing to start with the oldschool run of With You, Runaway, and Papercut at the start of the setlist.

The UK November 2003 setlist was very similar to this one, but the band changed a few things. Papercut opened that setlist into Points Of Authority, followed by Don't Stay and Somewhere I Belong, with With You and Runaway further down in the set. This North American Tour setlist was just a jumbled order from that, and a longer intro added for the show-opening With You. "Rarities" on this tour included Nobody's Listening, which was dropped after the tour, It's Goin' Down in the full-band form for the first time on a North American Tour since 2002, and My December, which was not played again after this tour until Japan 2006.

Members of the different bands on the tour also frequently came out for One Step Closer which closed the set.

The tour kicked off in Fairfax, VA on January 16th. The tour featured a kabouki (a curtain) at the front of the stage, which Linkin Park brought back again later for Projekt Revolution in 2007. LP also frequently brought up a fan from the crowd to play Faint with them on guitar. This happened at many of the shows on the tour.

The tour featured several dates in Canada, three to be exact, which took place in Montreal, Toronto and Vancouver. Mike had this to say about it during an interview, "On this tour we've got three dates in Canada which is nice, we're trying to get up here a little bit more. Even with the weather, we made it up."

At the Long Beach, CA show of the tour, Chester was sick. He had the crowd sing most of some songs, like Breaking The Habit, Numb, and Crawling, and even apologized to the crowd for his performance. My December and P5hng Me A*wy were dropped from the setlist.

Linkin Park had to cancel the next show of the tour in Inglewood, CA due to Chester falling ill, saying, "We deeply regret that the show at the Great Western Forum in Inglewood has been postponed. Chester is ill with bronchitis and acute laryngitis and has been advised not to perform."

Later in the day, Warner Bros. put out a press release saying, "LINKIN PARK vocalist Chester Bennington is ill with bronchitis and acute laryngitis and has been advised not to perform. Rest assured the show has been rescheduled for Monday, March 15, 2004, and your SAME TICKETS WILL BE HONORED FOR THE RESCHEDULED DATE. We are very sorry for any inconvenience this may have caused and we wish Chester a speedy recovery. As of now all other shows on this tour are still scheduled as planned."

The band made up the date, tacking a new show in Inglewood on the end of the tour on March 15th. Two days after the cancellation, the band members made an appearance at the Grammy Awards on February 8th.

P5hng Me A*Wy was dropped at the Nashville, TN and Lexington, KY stops of the tour for an unknown reason.

The end of the tour's routing was changed after the initial announcement, with the southeastern shows slightly being shifted to new dates. This resulted in the originally-announced show in Pensacola, FL to be dropped from the tour.

Linkin Park ended the tour in Inglewood, CA on March 15th. Chester talked about his recent eye surgery and said it was the first time he’s ever been able to see anyone in the crowd.

Linkin Park covered Are You Gonna Be My Girl? by Jet on the St. Paul, MN stop of the tour. This was the first and only time that the band has ever played the song live. The story is that Chester and the rest of the band dared Mike to go out onstage by himself dressed in clothes that Jet wears for the encore and play Are You Gonna Be My Girl?. He did it and even stayed dressed in those clothes for the rest of the show! There are several pictures of Mike on guitar and Mike on piano on My December dressed in those clothes.

Before the encore of the Tacoma, WA show, Mike announced a portion of the show's proceeds would be donated to the Pacific Northwest Research Institute for cancer research. The donation was in memory of a friend of the band named Rob, who passed away due to cancer.

Something funny happened on the Sunrise, FL date of the tour. As usual, the band brought up a fan to play guitar on Faint. The first guy they pulled up lied and said he couldn't play it. The band let him stand on the side of the stage for the rest of the show since it was birthday, but in the middle of the song, he runs from the side of the stage and tries to sing at Mike's micstand. Out comes Sean, Brad's guitar tech, who puts him in a headlock and drags him away!

Another funny thing happened on the Atlanta, GA date of the tour. Many members and crew from other bands on the tour came out on One Step Closer with giant inflatable penises and other inappropriate apparel on. A dog was even on stage. You can see a recap of it all in the LPTV episode for the tour.

During the final show in Inglewood, CA, the band celebrated Chester and Joe's birthdays. Joe got a cake for his birthday and threw it into the pit audience. Chester's actual birthday is March 20th, however.

Each night of the tour, various members of the bands on the tour would come out for One Step Closer. Sonny Sandoval of P.O.D. joined the band frequently, as well as Doug Robb from Hoobastank and Dan Marsala of Story Of The Year. Some of the shows featured a combination of two to three of the vocalists, while some shows only featured one of them.

Phoenix had this to say about the tour during an interview, "It's been great so far. This is the end of the first week so we got about five shows done under our belts and everything's finally coming together with the tour. But I would say the biggest thing to say right now is that people should get there early because Story Of The Year has just been setting the bar high early. For us, they're a band that we really liked their CD and we had heard they were good live but hadn't gotten a chance to see 'em so we brought 'em out on tour. From the first night on they're just killing it."

Mike also had this to say during the same interview, "I think it's a great show from beginning to end, even if just to go to watch it with putting us aside, you know, I really like those three bands a lot. We were talking to some of the other guys the other night, everybody's really happy and Doug Robb from Hoobastank came in our dressing room and said this was one of the best tour's he's ever been on. He said THE best tour but it's not over yet."

Inglewood, CA was postponed but rescheduled for the end of the tour.

The Pensacola, FL show did not occur after the tour was rerouted.

Despite several shows being recorded, no songs were ever released professionally from the tour.

Several videos from the tour were uploaded to YouTube by the lighting director at the time: Points Of Authority from the Toronto, ON as well as With You from the San Diego, CA stop of the tour. 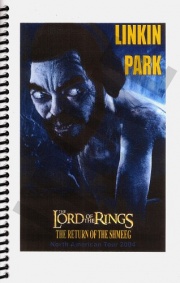