Road To Revolution: Live At Milton Keynes is the second live CD/DVD compilation by Linkin Park and the only one to be released in Blu-ray Disc format.

In July 2012, LPLive released a "workprint" version of the full show (including the three bonus songs) featuring different angles, different editing, and a raw audio mix.

In June 2008, Linkin Park headed to Europe for their third tour of the continent since Minutes To Midnight was released and their fourth visit overall on the Minutes To Midnight World Tour. They did a very short promo tour in Germany in England in April 2007, a sixteen show mix of headlining arena dates, festivals and spots opening for Pearl Jam in May 2007, and an arena tour of Germany, France, Switzerland and England in January 2008.

They returned for eighteen shows in Europe in June 2008 after a three month break following a North American Winter Tour, where Chester fell sick. Included in these shows in June was the first visit for Projekt Revolution to Europe. The band had three Projekt Revolution dates in Germany (München, Berlin, and Düsseldorf) followed by one in Milton Keynes, England to close the tour. 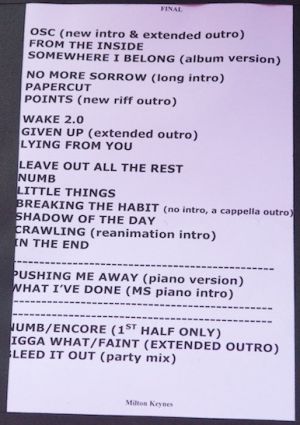 The Milton Keynes show was the largest Projekt Revolution show of the tour and featured a lineup that included Jay-Z, Pendulum, N*E*R*D, Enter Shikari, The Bravery (who was on the Projekt Revolution Tour in the United States starting the following month), and InnerPartySystem. HIM was originally on the lineup but was scratched a few months prior. This was Linkin Park's first actual show with Jay-Z on the bill since Live 8 in 2005, when the two acts combined their sets.

There were a number of problems with the the video screen behind the band. The problems persisted with the video during "What I've Done" messing up, as well as an orange Linkin Park logo appearing out of place during the following song. The screen incorrectly displayed the backdrop for "Faint" on "Numb/Encore". Rob had problems with his ride cymbal after "Given Up".

The show was supposed to be broadcasted live on various MTV channels in Europe. It was dropped off the schedule at the last minute most likely due to the possible release of the live CD/DVD from this show. Band members stated that they filmed the show without any expectations and upon reviewing it, decided to release it. Phoenix said, "We knew going in to the show we were recording it, we knew it was gonna be a special show for us and we figured it would be something we really like the rest of the world to see. Having seen the footage and the largest Projekt Revolution show abroad, it made sense to edit it and put it out."[1] Mike added, "Leading up to the Milton Keynes show we were... It just seemed like the math was there telling us we should probably film this thing. It was the biggest Projekt Revolution show to date, and it was in a pretty well-known and prestigious venue, and Jay-Z was going to be on the bill and we would be able to do a couple of songs with him. So we decided we might as well, even if we don't use the footage for a DVD or some kind of release, we should at least just tape it just so we could have it kind of as a snapshot of where we were in the touring cycle."[2]

Once Jay-Z's management cleared the footage, they proceeded with a release. This was the only show of the tour to be released as a DSP (Digital Souvenir Package). The other shows on the tour remain a hot ticket item for fans as they have remained unreleased since 2008, the only tour from 2007 to 2012 to not be released. Chester mentioned that this was the biggest Projekt Revolution show to date.

The DSP was mixed by Pooch and Dylan Ely (two of Linkin Park's in-house crew members) and re-used for Road To Revolution with minimal post-production work. There was very little overdub/editing work done to the recording. The biggest change was the mastering by renowned mixing engineer Brian "Big Bass" Gardner.[3]

Starting with Projekt Revolution 2007 in July 2007, Linkin Park began rotating their setlists between three different song order variations. This continued through 2007 and 2008 and included this Summer European Tour in 2008. When the tour began, the band debuted three brand new setlists, titled Set X (opening with "One Step Closer"), Set Y (opening with "What I've Done"), and Set Z (opening with "No More Sorrow").

At this show, Linkin Park performed a variation of Set X that they had been playing on the European Tour at the time. However, there were a few changes. "From The Inside" (originally tenth in the setlist) was swapped with "Lying From You" (originally second in the setlist) in the order. "Reading My Eyes" was dropped and Mike rapped "Hands Held High" acapella instead. He said, "during the Milton Keynes show, there was a fan in front of the crowd who had a sign that said "Play 'Hands Held High.' " Halfway through, I thought, we can't play the song because we aren't prepared — but I can give him the first half. So I just threw the verse in a cappella. In fact, we added that verse to the set, so that kid's sign essentially changed the set for the rest of the year."[4] A few fans in the front started cheering for the band to play "No Roads Left", which prompted Mike to shake his head.

The rest of the setlist remained the same except for the ending. "In The End" closed the main set and the band kept "Pushing Me Away" (Piano Version) and "What I've Done" for the first encore and added the first half of "Numb/Encore" and "Jigga What/Faint" to a second encore with "Bleed It Out" closing. These two songs with Jay-Z were performed earlier in the year at Madison Square Garden in New York City, New York when he came out as a surprise guest during Linkin Park's headlining set.

Months after the show, an earlier draft of the setlist was sent to LPLive from a fan who attended the show and was in the front row. This setlist featured "Reading My Eyes" and "Dirt Off Your Shoulders/Lying From You", which hadn't been played since 2005 at Live 8.

On the DVD, "Somewhere I Belong", "Papercut", and "Points Of Authority" were cut and were added as bonus content. The CD version has a few songs omitted that are on the DVD, including the bridge of "Bleed It Out". When questioned about it, Mike said, "CDs have limited space (74 min?), so all the audio wouldn't fit. We decided to keep the DVD and CD consistent. The rest of the stuff will be made available to you, though…you’ll see!"[5]

"Somewhere I Belong" and "Papercut" were released in 2013 as bonus tracks for the new Meteora deluxe edition on iTunes.

"What I've Done" from the CD/DVD was nominated for a Grammy for "Best Hard Rock Performance" at the 52nd annual Grammy Awards.

The show was released as a Digital Souvenir Package in July 2008. Linkin Park released all of their normal headline shows from Projekt Revolution 2007 to the end of Projekt Revolution 2008, except for the Summer 2008 European Tour. This was the only show from that tour to be released, likely because it was such a monumental show for the band.

On October 28, 2008, an abbreviated version of the show was broadcast on WOWOW. "Lying from You", "Numb", "The Little Things Give You Away", "Numb/Encore" and "Jigga What/Faint" were not broadcast.

On November 6, the official DVD trailer was posted on Linkin Park's YouTube channel. On November 7, the performance of "Breaking the Habit" premiered (though previously broadcast on WOWOW) on the band's official MySpace page. On November 18, the band began streaming the entire album on their MySpace page. "No More Sorrow" & "Given Up" awere mixed up in track order on the stream and "Bleed It Out" was uploaded twice, one in the place of "Numb".

On November 20, Linkin Park's official website announced the release date would be changed to November 24 from November 25 and the footage for "Bleed It Out" (amended) premiered on their YouTube channel. On November 25, the footage for "Numb/Encore" & "Jigga What/Faint" premiered on their YouTube channel in one video. On December 2, 2009, it was announced the live version of "What I've Done" from the album is nominated for Best Hard Rock Performance at the 52nd annual Grammy Awards.

In July 2012, LPLive released a workprint of the show, showing the original complete show, it is a little different from the DVD, the songs that were performed with Jay-Z were dropped, there's a little extra to the workprint not seen or heard on the DVD.

The album was released for the first time on vinyl for Record Store Day 2016 as a two LP set numbered and pressed on translucent red with black splatter vinyl and includes a DVD. It was limited to 3,000 copies.[6] However, due to a manufacturing error, fans received a clean version of the album rather than the explicit version as advertised. Fans who purchased the vinyl were able to request a copy of the explicit version to be shipped to them free of charge.[7] Contrary to the Record Store Day release, this new explicit version wasn't numbered and it was a black vinyl, not the splatter.