The "International Tour" that began on July 19th and continued until August 22nd was a series of Linkin Park shows across the world to promote their new single at the time New Divide. Due to the massive popularity of the song, the band was requested to perform shows in support of the single. Since the tour had/has no official name, we are giving it the title "International Tour" since Linkin Park played shows in Europe, Asia, and America. Another appropriate name could also be the "New Divide Tour" because the song gained huge attention worldwide and lead to festivals requesting Linkin Park.

Since New Divide was the theme song for Transformers 2: Revenge of the Fallen, Linkin Park was asked to play its premiere in Los Angeles. The show was held at the corner of Le Conte Ave and Broxton Ave, right outside of theater that debuted Transformers 2. In order to hold the show in the street, the TR2 crew had to take over and shut down the Wilshire and Mann Villages in Westwood.

Linkin Park went on stage outside immediately following the premiere. Fans were only able to attend the show by winning tickets through KROQ or obtaining them via the LPU. It was reported that fans walking up right before show time were let in without passes, however. The video of New Divide was shown on MTV.

The setlist for this performance was a short one, consisting of What I've Done, Faint, Numb, In The End, and Bleed It Out before the band took a short break and debuted New Divide.

Five days prior to the premiere, the band held a private rehearsal at Third Encore for fans. The performance was for four winners of a contest that Music For Relief and SocialVibe put on together. Winners were flown out to Los Angeles to meet the band and attend the rehearsal. It was at this rehearsal that the band allegedly rehearsed By Myself for the first time since 2003.

A draft setlist for the premiere (which was not played) was: One Step Closer, Faint, Numb, What I've Done, Bleed It Out, and New Divide.

The "tour" kicked off on July 19th in Istanbul, Turkey at Rock'n Coke. This was the first Linkin Park show in Turkey. In 2008, it was rumored that they were going to play in Istanbul (even by Music For Relief), but the show never ended up taking place.

A brand new eighteen song setlist was debuted at this show. Session was performed for the first time since the last show of the LPU Tour in 2003 in Los Angeles, CA. Other songs such as Points Of Authority, Breaking The Habit, Crawling, and Bleed It Out received new intros.

The fourth show in Pori, Finland was for Sonisphere, where Linkin Park was direct support for Metallica.

At the show in Stuttgart, Germany, Mike rapped part of verse one of High Voltage and the end of Bloc Party over the intro of Points Of Authority for the first time. Mike messed up High Voltage so he used the mistake to go into Bloc Party. He rapped verse one of'Reading My Eyes over the outro for the first time as well. Mike gave a shoutout to the LPU before he started the outro, saying it was requested at the Meet And Greet.

This show was the first time that Dead By Sunrise, Chester's new side project at the time, came out to perform three songs (Fire, Crawl Back In, and My Suffering) during the break between Linkin Park's main set and encore. After the tour, Chester said the suggestion for DBS to play in this spot was actually made by Mike, who was supportive of the project. In all, Dead By Sunrise did this at six shows: Stuttgart, Knebworth, Gräfenhainichen, Chiba, Osaka, and Pomona.

The tenth show of the tour was in Portimão, Portugal at Rock One. The odd thing about this show is that it was not actually confirmed by the band or festival at time that Linkin Park began the tour. On July 23rd, in Graz, Austria, LPLive was able to confirm the show with Linkin Park's crew. The show was actually confirmed the next day by the festival and band, on July 24th. It is likely that this is the shortest notice the band has ever given for a festival headlining appearance...twelve days out.

In early August, Linkin Park performed at Summer Sonic Japan for the first time since 2006.

On his blog, Mike asked fans for suggestions of what to rap over Points Of Authority for the remainder of the tour. This started at the Osaka show on August 9th, where Reading My Eyes appeared over the outro again. In Okinawa, Step Up was rapped over the intro. At the show in Taipei, Mike rapped verse one of Dedicated over the intro, which was the first time he has ever rapped part of it live. Before the song, he said, "Check this out, this is for everybody who visited the web." Mike was referring to his blog post on MikeShinoda.com at the time.

Included on this tour were four cities/countries that had Linkin Park shows canceled in 2008. Zürich held an arena show after Interlaken 2008 was canceled, and Linkin Park visited Taipei, Shanghai, and Macau after the Asia 2008 cancellations. For the show in Shanghai, LP had to submit a list of songs to the Chinese communist government to be "pre-approved" for the setlist. The Chinese did not approve Given Up and Hands Held High and required them to be removed from the show for political reasons. Instead, Session segued into From The Inside to start the show.

The last show of 2009 was held in Pomona, CA for Epicenter '09. Linkin Park was direct support for Tool and played directly after Alice In Chains, and the show was webcasted online via KROQ. A power outage happened right in the middle of Breaking The Habit. The PA system went dead but LP's gear was still working due to backup batteries. The power came back on later in the song. Due to this interruption, the planned DSP (Digital Souvenir Package) for the show was corrupted and could not be sold.

The band sold DSPs for most shows of 2009, except for the festival shows in Istanbul, Pori, St. Petersburg, Knebworth, Portimão, and eventually due to the power outage, Pomona.

At the second show in Athens, Greece, during the second verse of Given Up, Chester sang, "looking for help somehow, somewhere and you don't care" instead of "and no one cares". The interesting thing about this line is that the lyric is incorrect in the Minutes To Midnight album booklet and actually lists "you don't care" as being the lyric, but the studio version ended up being "no one cares". This is the only known show where Chester sang the alternate line from the song.

Something similar happened at the Tampa 2014 show on Carnivores Tour, where Mike later confirmed that he accidentally rapped the demo lyrics of Wastelands during the show.

The band brought a fan on stage to sing the bridge and ending of Bleed It Out with Chester at the show in St. Petersburg, Russia. 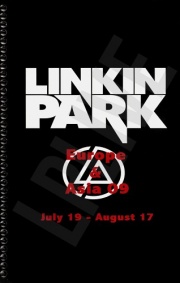