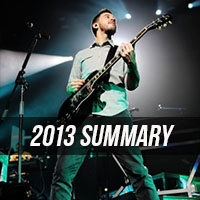 2013 was the shortest year of touring on record for the band. Since the year 2000, they had played at least nineteen shows a year (2009 was the shortest before this, with nineteen). 2013 ended in seventeen performances (counting the rehearsals with fans in attendance).

Starting with a one-off warmup show in Las Vegas, NV on February 13th, the band kept Set A around from 2012 and replaced "In My Remains" with the recently-debuted "Castle Of Glass" (which went after "Breaking The Habit"). Following this show, Linkin Park headed to New Zealand and Australia to kick off an eight show tour across the continents, falling just one show short of their nine show treks there in both 2007 and 2010. The first show was in Auckland, New Zealand and was the band's first show in the country since 2007, making the 8th LPU Summit an appropriate fit for fans. At this Summit, LP performed a five song soundcheck for attendees, who also got to walk across the stage, tour the venue, play with the band's instruments and participate in a Q&A session with Linkin Park.

From there, Australia was the next destination as many bands, including LP, made their way to the continent for the annual Soundwave festival across five cities. Along with performing the festivals, the band performed two headlining shows â one each in Sydney and Melbourne with Stone Sour opening both, who also opened the Auckland show earlier in the tour. At Soundwave, Linkin Park headlined Stage 1 B and played just before Metallica. With two stages attached together for the main stage, Soundwave guaranteed that there would be almost no gaps in music throughout the day. For these festivals, the band abbreviated their headline Set A and Set B setlists to make them into Festival A and Festival B sets, respectively. The headline show in Melbourne featured a first for the band as they took a poll in the encore for the fans to yell which song they wanted to hear the most "In The End" or "A Place For My Head". The latter won and "A Place For My Head", a fan favorite, made its way in, pushing "In The End" out of the setlist for the first time since 2001!

After a five month break, Linkin Park reconvened in Los Angeles for the Sunset Strip Music Festival. A KROQ private rehearsal took place a few days before the show for a few lucky winners. At the festival, LP performed a shortened Set B, similar what they played in Australia earlier in the year for Soundwave. "Reading My Eyes" reappeared over "Bleed It Out" as a homage to the band playing outside the local venues they used to play a decade prior at the Key Club, the Roxy, the Whisky and more.

To close out 2013, there were six shows on top in Asia. The familiar Summer Sonic festival shows started the tour but Linkin Park opened for Metallica at this rendition instead of headlining both days like they did in 2006 and 2009. The next four shows took them to the Philippines (their first there since June 2004), Hong Kong (home of the ninth LPU Summit), Taiwan, and Malaysia (their first there since October 2003). The Hong Kong Summit featured a two song soundcheck for fans of "Victimized (w/ QWERTY)" and "The Catalyst", both of which hadn't been played since February 2013 due to the shortened setlists the band was using for the year.

After this tour, the band took the rest of the year off to work on recording their new album.