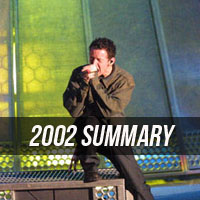 2002 may look a little empty to most fans. It does to us too. The band kept a relatively short touring schedule that year in order to prepare for their sophomore album. Their lone touring experience in 2002 was their first Projekt Revolution Tour where they were joined by Cypress Hill, Adema and DJ Z-Trip on a 19 city schedule. This would also be the band's first-ever United States headlining arena tour. They closed out their touring for the year with their first Mexican appearance, playing in Mexico City in March opening for Korn. After a Young Angels benefit concert in Los Angeles, It was at this point that the band took time for themselves, ultimately producing Meteora which was to be released in 2003.

Setlist-wise in 2002, the band took their 2001 headlining setlist and changed it up very slightly. Their first-ever full-band cover song (in full) was performed in the encore and the lucky song would be "My Own Summer" by the Deftones. At the Uniondale, NY stop of the tour, Sal (a longtime Linkin Park fan who has seen well over 50 shows) was able to join the band on stage for the song! "And One" was in the setlist for the first few shows of the tour before being replaced by the new song "It's Goin' Down", which was debuted just after the start of the tour.