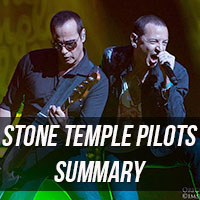 On May 18, 2013 during the annual KROQ Weenie Roast, the stage turned after Vampire Weekend to reveal a surprise guest - Stone Temple Pilots. However, Scott Weiland was not with them and instead it was Chester Bennington himself on the stage performing with the band! The news spread across the Internet like wildfire as the band teamed up with KROQ to release their new single "Out Of Time" right after their performance ended. Not bad, eh? It was truly an honor for Chester to be with his idols, a band he grew up listening to and even a band whose t-shirts he wore on stage at older Linkin Park shows.

Halfway through the tour, the band changed their setlist slightly to bring in the new single "Black Heart", two other songs "Meatplow" and "Lady Picture Show", change up the order a bit and drop "Sour Girl". Along with an acoustic "Pretty Penny" that was performed twice throughout the fall at two acoustic events, Chester had learned quite a bit of material for this run.

In October, Stone Temple Pilots performed on the Tonight Show with Jay Leno and even ventured to Japan for two shows. The rest of the year in November and December was spent playing one-offs and radio shows throughout the country.

Unfortunately, the first International Tour that was planned for Stone Temple Pilots in February and March 2014 was cancelled due to Chester having to finish the new Linkin Park record. This was a bummer for fans as Stone Temple Pilots was going to play Dubai, India (who has been trying to get a Linkin Park show for quite a while), Indonesia, Australia and even a two night stand in Hawaii. After the cancellation, the band only was able to perform at a private party in Hollywood in April 2014 before Chester was forced to go back to Linkin Park for presumably the rest of the year.

Chester was able to squeeze in five more Stone Temple Pilots shows in 2014, working them around the Linkin Park tours. Between Linkin Park's European Tour in summer 2014 and Carnivores Tour, Stone Temple Pilots headlined the Bud Light Weenie Roast in Woodlands, Texas. They took this opportunity, even though it was a one-off show, to play "Crackerman" with Chester for the first time.

In October, they played two shows in Alabama and one in Kentucky (two being festivals), adding "Sin", a new stripped down version of "Plush", and "Heaven & Hot Rods" to the setlist....all of which were played with Chester for the first time. Not bad! And on Halloween, the band played a show in Connecticut just one day before Chester flew to Switzerland for Linkin Park's large European Tour that November.

Unfortunately, Chester broke his ankle in January 2015 playing basketball before a Linkin Park show, forcing LP to cancel sixteen shows of their tour. His first test back on the road would come with Stone Temple Pilots. They played a warmup show in Scottsdale, AZ before embarking on a fifteen show tour. Fans were very curious how Chester would fare on this tour, even though it was announced after he broke his ankle.

The first show came in Seattle, WA....home of the grunge scene and a city Chester hadn't visited in quite a while. It was obvious how much the entire band enjoyed playing each other when they added "Lounge Fly", "Pruno", "Coma", "Adhesive", and "Creep" to the setlist, once again, all of which were played with Chester for the first time. We later found out that during the very last rehearsal for the tour, Chester was listening to "Pruno" and decided to bring it up to the band "as they were packing their gear away, closing the case on the last guitar" that he wanted to play the song. His wish was granted as the rest of Stone Temple Pilots liked the idea...and it was added!

The first few shows were brutal for Chester, as he later said he had to walk off stage and immediately stick his entire bottom part of his leg in a bucket of ice. He had to learn how to walk again and didn't have full flexibility in his foot....but you wouldn't ever notice that at the shows as he was kicking ass and appeared very energetic. In the middle of the tour, he died his hair blonde, which he hadn't done since 2003, and then pink for his daughter as it was her favorite color. All fifteen shows went off without a hitch, bringing the band's biggest crowds yet since their comeback in 2013. During the tour, a few fans were played clips of the new Stone Temple Pilots album off of Dean's phone, fueling speculation that the album would be coming out in late 2015.

In May and June, Stone Temple Pilots took the opportunity to join a few more U.S. festivals, hitting their 20th total festival performance since Chester joined the band. At the same time, a fall U.S. tour was announced with several more festivals intertwined with headlining shows since Linkin Park's touring cycle was drawing to an end.

This ten show tour ended up proving to be Chester's last with the band. After the tour, Scott Weiland leaked that Chester had left the band, which ended up being confirmed by Stone Temple Pilots after the rumors went wild on the Internet. Chester felt that he had to devote more time to Linkin Park and his family, and that he couldn't give Stone Temple Pilots the time it deserved. His last show with Stone Temple Pilots ended up being a one-off at California's Aftershock in October 2015, the same festival that Scott played with the band for the final time as well. Chester reunited as a special guest with Stone Temple Pilots in March 2016 for a charity show, performing a nine song setlist. The band continued their search for a new lead singer, holding a worldwide contest for singers to audition for the spot.