Soundcheck Session: Live In Moscow is a live EP by Mike Shinoda. It was both his first live release and first video release.

Initially, this release was supposed to be just a Russian recap of the show, similar to what Mike Shinoda had done for his performance at Amoeba Records earlier that year, with interviews and a few select songs from the show; but Mike's team liked the final result so much that they decided to turn it into a worldwide release. Artwork was done by Mike and Frank Maddocks. 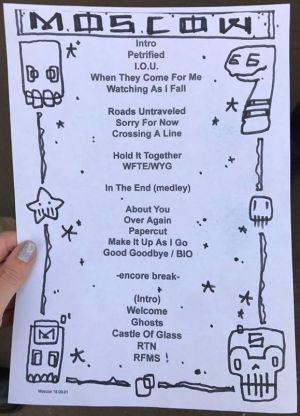 The EP was recorded live on September 1, 2018 at the Adrenaline Stadium in Moscow, Russia during the Post Traumatic European Tour. The first three songs were taken from the soundcheck and had crowd noise mixed in, making "In The End" and "Numb" the only songs from the actual live show.

The EP features both solo songs by Mike Shinoda as well as Linkin Park songs. "Make It Up As I Go" and "Crossing A Line" were taken from his debut solo album, Post Traumatic; "Roads Untraveled" from Living Things; "In The End" from Hybrid Theory; and "Numb" from Meteora. Stripped down versions of "In The End" and "Numb" were performed, with only Mike on stage, playing piano, while the crowd sang Chester Bennington's parts. "Make It Up As I Go" was performed without K.Flay. Instead, a backing track was used for her vocals. After the song, it was revealed they were working on a music video for it. The songs aren't in the exact order they were performed at the show. There are short interviews with Mike before each song.

Soundcheck Session: Live In Moscow appeared on iTunes on November 1st, 2018 by mistake and was removed from the store the same day. It was officially released on November 15, 2018 and appeared once again on iTunes by mistake, being removed that same day. The EP is exclusive to Apple Music and is only available in digital video format.