Sessions@AOL is a live EP by Fort Minor. It was the first and only Fort Minor live release.

Fort Minor started performing live in August 2005 with a series of festivals in Europe. At first, the lineup for the live show consisted of just Mike, Ryu (MC), Tak (MC), Cheapshot (DJ), and Beatdown (drums).

In October 2005, Mike added more members to his touring lineup. Black Violin was added for violin and cello and three backing vocalists were added as well. The new touring band made their debut on October 29, 2005 at the MySpace 2nd Anniversary Party in Los Angeles, CA. This Sessions@AOL performance a few days later was the second performance with the new lineup. This new touring lineup would stay with Mike until the end of the Fort Minor touring cycle in August 2006.

In the "Behind the Scenes" video for the performance, Mike says, "We aren't playing that many shows because I really want to keep it special, I don't want to like, water it down. So it is good to actually put it out there in a way that captures how good these guys play."[1] 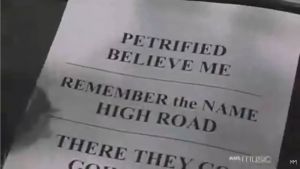 Sessions@AOL setlist ("It's Goin' Down" at the bottom)

The EP features five songs from the Fort Minor album The Rising Tied. "There They Go" is from the Special Edition of the album. The songs are taken from a performance at Capitol Studios (Studio A) in Los Angeles, CA on November 2nd, 2005 for Sessions@AOL, which was a popular series of often stripped-down or acoustic performances from artists in the mid-2000s exclusive to AOL Music.

Mike in the interview with AOL says that he deliberately didn't play a lot of Fort Minor shows because he didn't want to water down the product, so he thought releasing a live performance in this manner would be a good idea.

The setlist (in order) included "Petrified", "Believe Me", "Remember The Name", "High Road", "There They Go", and "It's Goin' Down." Only the first five songs were released, in a different order. "It's Goin' Down" was a common song in the setlist at the time for Fort Minor, but was not included in the release. In the "Behind the Scenes" video, a clip of "It's Goin' Down" is shown with Mike instructing the people holding the cameras filming the show to put their hands up to the song.

Several tracks were performed as versions that differ from the studio versions. "Petrified" has an extended outro. On "Believe Me", Eric Bobo from Cypress Hill joined the band on percussion as he is also featured on the studio version of the song. He performed a drum intro to the song and Mike instructed the band to do an extended ending to the track where the song built up and back down for a quiet ending with only vocals. "High Road" featured additional instrumentation at the end of the song for a violin-style ending.

After the performance, the band rehearsed "Where'd You Go" with Holly Brook several times as she would be touring/playing with the band to perform the song live for the very first time the next day when Fort Minor opened for Mos Def at Universal Amphitheatre in Universal City, CA. The live debut of "Where'd You Go" was the show prior to this, at the MySpace Party, but Chester Bennington sang the song with the band instead of Holly Brook. At Sessions@AOL, Mike Shinoda and production manager Jim Digby instructed all of the filming cameras to be turned off except for two people - the Fort Minor videographer and Holly Brook's mom.

On January 11th, 2011, LPLive posted a thread about the discovery of an internal DVD that featured the released songs, eleven and a half minutes of 'Where'd You Go' being rehearsed with Holly Brook, an interview with Mike, and Mike giving shoutouts to AOL for press purposes. The full package was released on January 17th, 2011 as an exclusive.[2] The internal DVD is 50 minutes; the official release is 18 minutes.

Sessions@AOL was first posted as a series of videos on AOLMusic.com to stream on November 18, 2005; the release came with a digital download as well.[3] The release featured artwork branded with "AOL Music" and was an AOL exclusive. Additionally, a "Behind the Scenes" video was available in video too, but was later preserved on the Fort Minor YouTube account when it was converted from a fan account to an official account.

Mike Shinoda told the Fort Minor Militia, "check for the sessions at AOL thing--that's cool" and "the live show has been a lot of fun. thats why i say you should check out sessions at AOL, so you can all see it."[4]

On July 18, 2006, Sessions@AOL by Fort Minor was released on iTunes as a digital EP with a new cover. This came about five weeks before Linkin Park's material was added to iTunes on August 26, 2006.[5]