Living Things+ is an international live DVD release by Linkin Park in 2013 titled Live At Admiralspalast Berlin, Germany. The DVD (packaged with the normal Living Things CD) combo was released at varying times in spring and summer 2013 during the Living Things World Tour and features songs performed from Hybrid Theory, Meteora, Minutes To Midnight, A Thousand Suns, Living Things, as well as single "New Divide".

In June 2012, Linkin Park kicked off their shortest world tour for an album yet when they began their European Tour for Living Things in Portugal at Rock In Rio. This short twelve show European Tour would be the only visit to the continent for the band in support of the album. A mix of festival shows and outdoor/stadium headline shows were scattered across Europe for the band to play.

At the time, Linkin Park was only performing two live songs from Living Things - lead single "Burn It Down" and promo song "Lies Greed Misery".

On June 5, 2012, Linkin Park stopped in Berlin after their Rock am Ring and Rock im Park shows for a small show at the Admiralspalast. To gain admission to the show, fans had to win tickets from Telekom Street Gigs or from the LP Underground. The band filmed the event and showed it in theaters across America for the "Living Things Concert Event" on June 25, 2012.

Additionally, the show was released to television, radio and an online webcast in the days leading up to the theater showing. 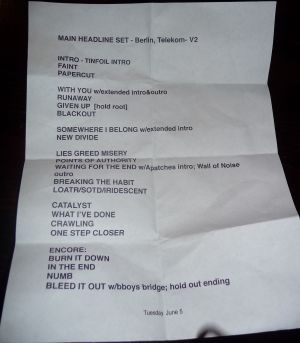 Living Things+ features a full set of eighteen professionally mixed and mastered songs from the band's show in Berlin.

Before the show, Linkin Park "performed" "Powerless" at a soundcheck to be included in a video of the song to promote the upcoming movie "Abraham Lincoln: Vampire Hunter" (including footage from the song, the film, and other portions of the Berlin show). It was directed by Timur Bekmambetov. Very few shots of Brad are shown in the filming due to Mike recording the guitars on the song in the studio. This is the only time that the song has been played live in any form by the band.[1]

The setlists at the time were notable for the band bringing back deep cuts from Hybrid Theory, including "With You", "Runaway", and "Points Of Authority". While A Thousand Suns deep cut "Blackout" remained in the setlist for this tour, there were no other non-singles included in the show except for "Lies Greed Misery".

"Leave Out All The Rest", "Shadow Of The Day", and "Iridescent" were performed together in a medley, unofficially called the "Ballad Medley" by fans.

The show was webcasted by Telekom Street Gigs on June 25, 2012, the same day that it was shown in theaters in the United States.[2]

Living Things+ was not released in the United States and was only released internationally.

Four songs were cut from the DVD - "Runaway", "Points Of Authority", "The Catalyst", and "Crawling". These four songs were not shown in United States theaters on June 25, 2012 either and they were also not included in the show's webcast by Telekom Street Gigs. While not mentioned in the tracklisting on the DVD, "Tinfoil" was included on the DVD before "Faint".

The artwork on the cover is the same artwork using on the "Living Things" vinyl release.