In summer 2003 after the successful release of the Meteora album, Linkin Park toured North America on Metallica's Summer Sanitarium Tour. The band played before Metallica and Limp Bizkit and after Deftones and Mudvayne. The band felt that the stadium run was a monumental tour in their history and they wanted to capture it by filming a live DVD, which became Live in Texas.

Metallica in July 2003 said about the tour, "We want Summer Sanitarium to be the best stuff that's out there now. I hope - and think - that we have done that. The other so-called headliners, Linkin Park and Limp Bizkit, are the best at what they do in their worlds. Deftones and Mudvayne...they have a different style, we're getting heavy music together. The fans are getting their money's worth - there are a lot of worn-out fans when we go on. It's a long day, but it's a lot of quality."

Chester discussed the background on Live in Texas after it was released, saying, "It was really kind of a spur-of-the-moment thing when we decided to make 'Live in Texas.' "Summer Sanitarium was going so well for us and the crowds were responding to us so well that we decided this was the perfect opportunity to do this. We gave the guys free rein to run all over the stage with us, get right up in our faces and go out in the crowds and that kind of stuff. We wanted to convey the energy that we put out on stage and we wanted to try our best to capture that on film. Those shows were really consistent. It was like that for us almost every day. We had a great time on that tour."[1] 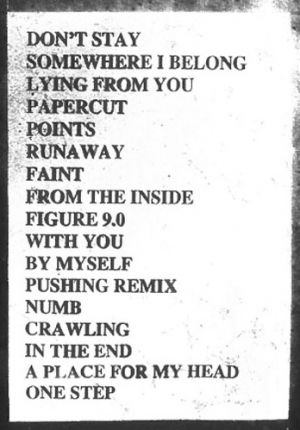 Show setlist artwork included on the DVD, likely a scanned copy of the band's setlist before editing was done

Live in Texas features a full set of seventeen professionally mixed and mastered songs from the band's shows in Houston, Texas and Irving, Texas on Metallica's Summer Sanitarium Tour in the summer of 2003. Footage and audio was taken from both of these shows on back-to-back days to create the live DVD, though the band left some songs omitted from the CD for inclusion on other releases.

On "From the Inside", Lars Ulrich of Metallica comes out on stage dressed as The Hulk to mess with Linkin Park. The band returned the favor by crashing the Metallica stage during the last show of the tour in San Francisco, CA. The LPU 2.0 Newsletter reads, "Toward the end of the tour, Lars Ulrich put on fuzzy, pink bunny-ears and big green "Hulk"-fists and invaded our stage to mess around with us during our set. Later, on the last day of the tour, we were allowed to go on stage and pull a little practical joke on Metallica, a feat that (as we were told) no band in twenty years has been allowed to do. We took a basket, blanket, and food onto their stage and had a little picnic as they played Master of Puppets."

At the end of "A Place For My Head", Phoenix sprained his ankle on stage.

The band called on director Kimo Proudfoot to direct the filming of the two shows and produce the DVD. Linkin Park would later work with Proudfoot again for the "Breaking the Habit" music video in summer 2004.

The band wore the same clothes for both shows to create a more uniform look on the DVD.

At this time, the band was performing mostly standard versions of the songs from Hybrid Theory and Meteora. "With You" on this tour was played as a mashup of the Reanimation version of the song. "By Myself" featured an intro only done in 2003, with Mike Shinoda rapping the bridge of the song over a slow instrumental buildup before the song kicks in. "One Step Closer" featured the popular Reanimation bridge with "1stp Klosr".

A highlight of the release is "P5hng Me A*wy" from Reanimation, a song that Linkin Park only performed in 2003 and 2004. It was the only song from "Reanimation" to be performed live in full until Linkin Park brought out Chali 2na of Jurassic 5 for a one-off performance of "Frgt/10" at the Music For Relief 2005 benefit show in Anaheim, CA.

The intro for the show that Linkin Park was using at the time was a custom intro but sampled "Dead Skin Mask" by Slayer. On the band's setlists, it was referred to as the "Devil Worship Intro". Due to the sample, the intro was removed from the release and the DVD begins with "Don't Stay".

Unlike tours before and after Summer Sanitarium, Linkin Park did not have the intro track “Foreword” before “Don’t Stay”. Instead, “Don’t Stay” began with the crashing sound in the very last second of “Foreword.”

The CD / DVD combo was released on November 18, 2003 worldwide. Some countries received exclusive theater events to show the film as well. On November 27, 2003, AOL for Broadband members were able to watch a special webcast of Live in Texas as a part of the AOL "Live BroadBAND Rocks! Event" which also featured shows by Coldplay, U2, and other artists.

Rob Bourdon in an email to the LP Underground on October 23, 2003 said, "What's up LPU... Just wanted to tell you a little bit about the new "Live in Texas" CD/DVD we're putting out November 18th in the US and November 17th Internationally. We filmed this during our Summer Sanitarium shows in August in Texas and we feel it gives everyone a chance to relive the live Summer Sanitarium show. We know that some LP fans never got the chance to attend this tour so this gives everyone a chance to experience our performance. Touring with Metallica was such an amazing experience and we want to share it with all of you. We look forward to releasing this album and hope you all enjoy it."

Recordings of "Don't Stay", "Figure.09", "With You", "By Myself", and "A Place For My Head" taken from these shows are found on the LP Underground 3.0 CD, with different editing than the DVD. Some of the audio from the LPU 3 CD varies from what is featured on the DVD, meaning some of the audio is likely from a different Texas show.

Due to the popularity of "Lying From You" in summer 2004, Linkin Park was forced to make it a single because of how much radio play it was receiving. However, the band was working on a music video for "Breaking the Habit" at the time and touring constantly so they did not have time to make a new video for "Lying From You". Instead, the band released the Live in Texas video of Lying From You as the official music video, with the studio version of the song overdubbed.

During release week, Mike and Chester said about Live in Texas, "We never expected to take it this far, but since we've gotten here it's been a lot of fun to put this together and present it in a way that is unique and something different for people to see us in a new light. We like the little venues, because you have the intimacy with your fans, and the big ones are great because you have the energy and volume of the big shows, and that's what you'll see in 'Live in Texas'."[2]

Brandon Belsky (formerly of Julien-K) worked as a ProTools engineer on the album.