This show in Moscow, Russia on June 23, 2011 came in the middle of Linkin Park's European Tour in June and July 2011 in support of A Thousand Suns. This was the second European Tour in support of the album and was a mix of headlining shows both indoors and outdoors as well as festivals, plus the Transformers 3 Premiere.

MTV in May 2011 said, "Linkin Park will perform in an outdoor concert at Vasilyevsky Spusk of the Red Square, with the Kremlin and St. Basil's Basilica looming in the background, on June 23, Paramount said in a press release. The concert coincides with the world premiere of "Dark of the Moon" at the Moscow International Film Festival."[1] The release also mentioned that the stage would feature a "Dark of the Moon" theme, which ended up being the decor around the sides and top of the stage.

The band announced the performance with a video from Phoenix and Brad, saying, "We are very excited to announce that we will be attending the worldwide premiere of Transformers: Dark of the Moon June 23rd in Moscow and we will also be performing for our Russian fans."[2]

Fans could win tickets from a variety of contests for this concert, one of which was the LP Underground. 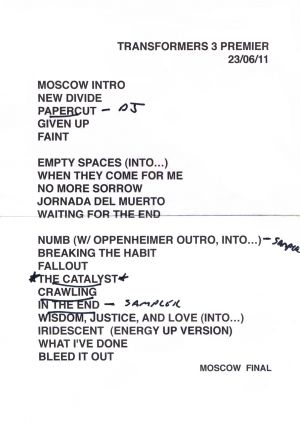 The EP was recorded live on June 23, 2011 in Moscow and featured tracks from every Linkin Park album up to that point, plus "New Divide."

At this time, Linkin Park was rotating three setlists across Europe for the summer, but sometimes with small changes made to each one depending on if the show was a festival and required a shorter time slot and therefore songs to be cut, or not.

The setlist in Moscow is a shorter version of the "A" setlist, with songs dropped from it to fit into the time slot they were given to play at Red Square. Tracks that didn't make the cut for this set include "Lying From You", "Burning In The Skies", and "Blackout". "Faint" was moved up in the setlist.

Before the show, Linkin Park posted a photo to Instagram with a slightly different setlist than what ended up being played. "One Step Closer" was listed on the setlist after "Crawling", but was not on the final setlist. "Crawling" was originally listed after "Breaking The Habit", but ended up being moved down to after "The Catalyst".

The performance in Moscow contains two unique tracks in the setlist.

The show's intro before "New Divide" was crafted specifically by the band for this show, as "New Divide" was the huge Transformers 2 single for the band and was going to open the setlist. It featured a buildup intro with numerous samples from the song as the band walked out to the stage, followed by fireworks, just before "New Divide" kicked in. It was performed just one other time, at the last show of the entire touring cycle for A Thousand Suns on September 25, 2011 in Singapore.

Second, this is the only time that the radio version of "Iridescent" was performed. On the band's setlist, it is titled the "Energy Up" version.

In the LPTV episode "Iridescent Rehearsals", the band is seen discussing this version of the song before the tour starts and whether to learn how to play it or not.[3]

Phoenix asks Mike about learning the radio version, "What's the point?" Mike says, "The point is to keep it consistent with what's out there. And it starts with more energy and builds which is kind of, in theory, good for the live show as opposed to starting mellower. I could go either way, whatever you guys want to do. We need to know this version in case we need to know it for television."

Phoenix replies, "I'm not opposed. My gut with it is that the sense behind a radio edit is to compress it. The live thing, it's almost like you want to do the opposite. Especially with something that is slower, don't chop it down, let it be artistic." Brad then says, "Let's learn it in case there's like a.... as Mike said we're going to have reasons to play that probably. So let's work on it, and then we'll do the longer version in the set, in the typical set."

While MTV and other press promoted Linkin Park performing "Iridescent" at the show, Mike confirmed it to the LP Underground in a chat in early May 2011.[4] He said "Iridescent" was used in the film because fans loved it and because Michael Bay enjoyed the song and said it fit perfectly with the plot of the movie.

Before "Iridescent" was performed, the most famous "flash mob" by fans of Linkin Park's career took place during "Wisdom, Justice, And Love". Fans held up signs with the three words during its performance, and the band went on to mention this moment for years afterward.

In an email to fans on June 29, 2011, the band said, "Check out our performance of "Iridescent" in Red Square at the Transformers: Dark of the Moon premiere event in Moscow. As if playing in such an incredible location wasn't great enough, our Russian fans surprised us by having a special moment planned. They had printed and distributed amongst themselves the words "wisdom," "justice," and "love," coming from Martin Luther King, Jr's speech. At the moment in our set where we use an excerpt from the speech, the crowd surprised us with their visual collaboration. It was an awesome sight to see, and something both us and our crew will remember forever. -Phoenix"

The setlist for this show is also notable for excluding "One Step Closer", a song the band ended up dropping several times on that summer 2011 tour across Europe.

On July 21, 2011, the show was released in MP3 format (320kb/s) as a prize for the "Iridescent Super-Fun Trading Fun-Cards" game. The band emailed fans and posted on social media, "Super-Fun Trading Fun-Cards have arrived! Collect all SIX of us to unlock your mystery prize. May the digital glow light your way. -BBB"[5] After all six cards were collected, fans could enter the codes from each card at Linkin Park's website to get a free download of the full show.[6]

The show's folder was titled "06_23_11_Moscow", which is how the Digital Souvenir Packages (DSPs) were titled at the time. Ken "Pooch" Van Druten and Dylan Ely, the team behind the DSPs, mixed and edited the show for release.

Despite not being able to be released in Digital Souvenir Packages beginning in early 2011 due to licensing/royalty issues with the MLK Jr. family, "Wisdom, Justice, And Love" was included in this release, presumably because it was a free download and was not being sold.

The hints to win the game with their locations are as follows:[7]

On May 25, 2011, Linkin Park announced a contest for fans to create an original piece of art for "Iridescent". The winner would be showcased in front of more than 30 million fans online and would be featured at Linkin Park's performance for the Transformers: Dark Of The Moon premiere in Moscow's Red Square on June 23. The submission deadline was June 12.[8][9] The band said, "We are looking for a talented designer out there to help us make a piece of official artwork for "Iridescent," the new single from Transformers: Dark of the Moon. The winner will be showcased for 30 million fans and at our performance in Red Square at the film's premiere on June 23. Go to http://linkinpark.deviantart.com to submit or for more information."[10][11]

The winner of the contest was announced on June 23, 2011. The band posted on Deviant Art, "Wan Muhammad Azzim from Melaka, Malaysia is the winner of the "Iridescent" Artwork contest. Check out his submission below. The runner up, also below, is Ashkan Harati from Belgium. Both entries were used on the screen at Linkin Park's performance in Moscow today. Thanks to everyone for participating. With so many amazing entries it was difficult to choose just one."[12]

Linkin Park emailed fans the same day, "Hey guys, We are performing what is sure to be an unforgettable show tonight for our Russian fans in Moscow's Red Square, in celebration of the world premiere event for Transformers: Dark of the Moon. Our production team, along with director Michael Bay, have put together an incredible setup amidst a breathtaking setting. I wish you could all be here to witness this performance in person, but since you can't, we have partnered with MTV and VH1 to air segments of it worldwide. I would also like to thank our fan, Wan Muhammad Azzim, for his winning entry in our "Iridescent" artwork contest, which you can view below. -Chester"

The premiere event and the performance of "Iridescent" was be highlighted on MTV, MTV2, mtvU, VH1 Classic and Palladia at 8:55pm ET/PT on June 24. A 30-minute piece aired the following week on June 30 in English speaking countries.[13]

Brad Delson posted on May 27, 2011 through linkinpark.com: "We want one of our fans to come out to Moscow to be our official red carpet correspondent and see us perform at the Transformers: Dark of the Moon premiere in Red Square on June 23rd. The winner and a friend will be flown to Moscow with a brand new camcorder that they will use to interview members of Linkin Park and stars from the film. We'll put your footage online for everyone to see."[14]

At the time, the band's performance in Moscow was a big hit with both fans and the press.

The flash mob on "Wisdom, Justice, And Love" turned out to be the first big flash mob in Linkin Park's career, influencing many flash mobs over the years. After walking off stage after the concert, Mike said, "We got flash mobbed tonight. The Wisdom, Justice, and Love papers were really unexpected. I don't know how that happened, but it wasn't us, and it was pretty cool. It was a lot of love from Moscow, so we appreciate that. We are seriously impressed, that was cool."[15]

Over the years, Linkin Park has mentioned quite a few times how special the flash mob was at this show. At the Moscow, Russia show in 2018, he performed the piano part to "Wisdom, Justice, And Love" as a spur-of-the-moment surprise in the show. Mike said, "Do you know what this is? These are the chords from a song, I don't know if it's a song or if it's an interlude, off of A Thousand Suns. And this was the first real Russian flash mob. I was BLOWN AWAY, I remember we were sitting there, we were in Red Square. Some of you were there, yeah? It was crazy man, you guys came out of nowhere with signs with the name of this song which is Wisdom, Justice, And Love. That was so dope. And you guys... ever since, you've become... you're famous in the Linkin Park fan community that the Russian fans are always so energetic and come with cool stuff at the show, it's so cool, thank you guys so much for that."[16]

- This show was the first time Linkin Park dropped "One Step Closer" from a big performance. The song ended up also being dropped for two more performances on the tour after Moscow - Arras, France on July 1st and St. Gallen, Switzerland on July 2nd.