Live In Monterrey is a live DVD release by Linkin Park in 2014 released with the album The Hunting Party. The DVD (packaged with the normal The Hunting Party CD combo) was released the day the album came out and features a show from 2012, with songs performed from Hybrid Theory, Meteora, Minutes To Midnight, Living Things, as well as single "New Divide". No songs from The Hunting Party are present on the DVD due to the album coming out in June 2014 and the live show being from September 2012.

In September 2012, Linkin Park had just wrapped up a wildly successful tour of North America on the Honda Civic Tour with Incubus and Mutemath, their second tour in support of the new album Living Things. In between the North American Tour and South America in October, the band performed headlining shows in Monterrey and Mexico City, Mexico before closing the run with an appearance at Las Vegas's iHeartRadio Music Festival. 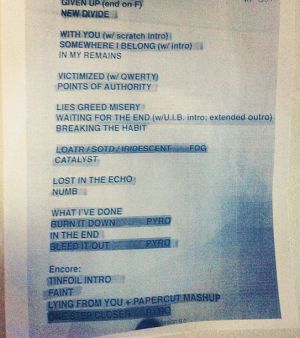 Show setlist, unfortunately the only copy that exists and the top is cropped off

Live In Monterrey features eleven professionally mixed and mastered songs from the band's show in Monterrey for MTV World Stage.

The performance featured a unique stage setup and design used only for this show, in partnership with MTV for MTV World Stage.

At this time, Linkin Park was rotating three unique setlists on tour. The setlist that opened with "A Place For My Head" was played in Monterrey and the setlist included 23 songs.

The songs chosen for the release were singles with the addition of "Lies Greed Misery".

The show began with a lengthy intro to "A Place For My Head". The other tracks on the release were performed similarly to their studio versions with the exception of "Somewhere I Belong", which had a lengthy, extended 2012 intro tacked on to the start, as well as the normal outros for both "Bleed It Out" and "One Step Closer".

Linkin Park officially announced the album preorder on May 3, 2014 and made no mention of a DVD.[1]The CD / DVD combo was announced on May 26, 2014 by Best Buy and was released on the day the album came out.[2] In the United States, it was a Best Buy exclusive with The Hunting Party for $16.99, only $3 more than the regular album. At Best Buy, fans could pay an additional $5 to get a CD with "Guilty All The Same" and "Until It's Gone" while supplies lasted. Linkin Park's announcement on May 29, 2014 read, "Pre-order the standard or exclusive deluxe version of The Hunting Party for a $5 deposit at your local Best Buy Store now, and walk away immediately with a 2 Song CD single featuring "Until It's Gone" and "Guilty All The Same" (feat Rakim). Find your local Best Buy store here. The Best Buy exclusive deluxe version of The Hunting Party features a bonus DVD of the 2012 MTV World Stage concert from Monterrey, Mexico and can also be pre-ordered online here."[3]

The combo received a worldwide release - Europe, Asia, South America, South Africa, etc. It was not an exclusive to any retailer in other countries.[4]

Tower Records and HMV originally listed the DVD release as being from Carson, California 2012.[5]

The songs chosen for the release account for roughly just half of the show in Monterrey. "A Place For My Head", "New Divide", "Somewhere I Belong", "Points Of Authority", "Lies Greed Misery", "Lost In The Echo", "What I've Done", "Burn It Down", "In The End", "Bleed It Out", and "One Step Closer" were the only songs released officially by Linkin Park. The DVD was listed as ten songs only on the Best Buy website, but "New Divide" was actually included as well, which is not in the tracklisting, making it eleven songs.

The MTV World Stage episode from this show was broadcasted by MTVLA on October 5th, 2012 and again by MTV three weeks later. The broadcasted songs differ slightly, with the MTVLA version exclusively airing the additional track "LOATR/SOTD/Iridescent".

Additionally, "Given Up" and "In My Remains" were provided for fans to watch on MTVLA.com.