This show came in the middle of Linkin Park's North American Arena Tour in February and March 2008. The band performed the show on an off day between the Baltimore, MD and New York City, NY shows. This tour was the second North American run for Linkin Park in support of Minutes to Midnight.

Live From SoHo was the most intimate Linkin Park performance arguably ever as they took the stage in the SoHo Apple Store for a surprise five song set.

The performance was advertised on New York City-area radio stations and was invitation-only for 200 radio contest winners along with industry friends and professionals. Billed as playing at 11:55pm, the band took the stage after midnight.[1] Mike Shinoda announced the performance on his personal blog saying, "also, look forward to a special show that we’re doing in NYC in conjunction with apple…shh…it’s a secret…"[2] 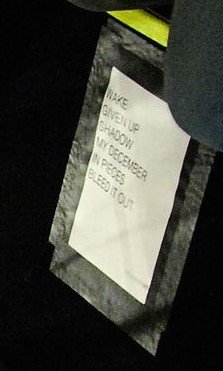 The EP was recorded live on February 21, 2008 (since the band took the stage after midnight) at the Apple Store SoHo in Manhattan as part of the Live From SoHo series on iTunes.

With the exception of "My December", all songs were taken from Minutes To Midnight (the album being promoted at the time). The band performed a rendition of the song which featured Mike on piano and Chester on vocals, with a completely reworked piano arrangement. This version of the song was new to Linkin Park's setlist beginning at the KROQ Almost Acoustic Christmas show in December 2007 and stayed in the rotating setlists for the January tour of Europe and the February and March tour of North America.

Initially released exclusively on iTunes in m4a format, the EP was eventually issued on other digital music stores in mp3 and lossless formats. The EP never received a physical release.

On March 4, 2008 after performing at the Staples Center in Los Angeles, CA, Mike posted on his blog, "next, the iTunes SoHo performance. in case you haven’t heard, we played a secret show at the SoHo apple store in NY. it was awesome…the tracks are now available for purchase on iTunes. go check them out!"[4]

Spence D. of IGN Music gave the EP a 5.9 score, saying, "Sadly this live EP stopgap shows the band incapable of pushing their sonic boundaries within a live context. Granted performing in the middle of an Apple store is a far cry from a stadium or even a dedicated music club, but still the band had plenty of options to tweak things up. "My December" proved that they can strip things down and lend a different sheen to their material. It's too bad they didn't see fit to do at least that with the other five tracks included here. In the end Live In SoHo is rather abrupt and devoid of any real surprises."[5]