iTunes Festival: London 2011 is a digital EP release by Linkin Park in July 2011, containing songs from the band's performance at the London iTunes Festival on July 4, 2011.. The EP features songs performed from Hybrid Theory, Minutes To Midnight, A Thousand Suns, as well as the cover "Rolling In The Deep", a track by Adele.

Linkin Park concluded their summer 2011 tour across Europe with a performance in London, England at the brand new iTunes Festival. The setting for the show was the intimate Roundhouse, a hard ticket to get for fans. The entire show was streamed for free on iTunes.[1] 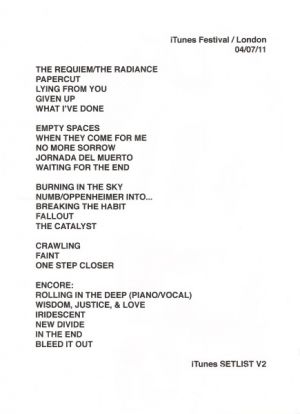 The versions of the six songs on the release are standard, with the exception of "Bleed It Out" featuring a bridge with the first verse and bridge of "A Place For My Head".

"Rolling In The Deep" was performed by Mike and Chester to open the encore of the show (replacing "Blackout") because iTunes requested the band play the track after the video went viral of Linkin Park's Hamburg LPU Summit acoustic performance of the track earlier in the tour.[2][3]

The EP was released digitally three days after the show on July 7, 2011 after being mixed by Ethan Mates.[4]

On July 8, 2011, Linkin Park emailed fans saying, "As many of you have seen online, we performed at the Roundhouse in London for the iTunes Festival earlier this week. We've seen so many great comments from you all that we decided to release an EP from the show, including our cover of Adele's "Rolling In The Deep." Full tracklist below. Click here to download it on iTunes. We hope you enjoy. -Chester"

The false start on "Rolling In The Deep" was not included in the track. This performance of the song was released as a standalone single and was never performed again.

On February 8, 2013, Linkin Park released three additional songs from this performance (not included on the iTunes Festival: London 2011 EP) on the Living Things Australian Tour Edition CD before the band's tour of New Zealand and Australia. The second CD in the release contained five live songs - three from the London iTunes Festival show in 2011 ("In The End", "New Divide", and "What I've Done") and two from Rock im Park 2012 ("Burn It Down" and "Lies Greed Misery") as well as the KillSonik remix of "Lost In The Echo".[5]