"Hold It Together" is the 9th song off of Mike Shinoda's debut studio album, Post Traumatic.

Mike enlisted Darren King, formerly the drummer of MUTEMATH who toured with Linkin Park on the 2012 Honda Civic Tour, to add drums to this song.

In April 2017, Mike mentioned Darren as someone he'd like to have in an "ultimate all-star" band in response to a Kerrang Magazine question on Twitter. He said, "Fun game. Maybe Darren King (drums), Flea (bass), Page Hamilton (guitar & bkgd cox), Frank Turner (vox)"[1]

Mike told Rolling Stone about the birthday party line, "That's one of the lines that struck me in the moment. I don't think of myself as a songwriter that usually collects little things while they're happening and goes, 'Oh, that would make a great song.' I think because I was so immersed in writing the record, it happened quite a bit. Some of those are my favorite moments on the album."[2]

In an interview with MDR, Mike was asked about "Hold It Together." The interviewer asked, "And there's another song called "Hold It Together" about people confronting you with your loss all the time. According to the lyrics, even at a six year old's birthday. Did that really happen?"

Mike replied, "Yeah! I mean that was just one example. That happened, but it was, you know... People would just bring up what had happened with Chester, they would bring it up at the weirdest times, at the wrong moment. I think they were just nervous, you know? They were just nervous so they couldn't help but ask about things. And the nice thing is that it's getting better. The more I talk about it to people and the more they hear the songs, the less we deal with that. As I was making the album, I knew - a lot of these things that I was writing about were moments in time, they were snapshots in a specific time, and that those moments would go away eventually. And I wanted to capture them when they were happening."[3]

Talking about how the song was made, Mike said, "Go do yourself a favor and check out Darren's Instagram page because he puts a lot of his stuff up, his crazy, creative studio studio sessions. We didn't meet in person because he lives in not LA. He said, "Yeah I get a really good sound at my home in my home studio, so let me just send you tracks." And we did it that way and then I chopped those up and used them. I didn't just like, play the drums. I grabbed them and effected them and chose different sampled drum parts for the beat and verse and got to his part in the bridge. Darren's the reason the drum stuff on "Hold My Shit Together" off of the Post Traumatic record was so good. He's so great."[4]

On a Twitch stream in September 2020, Mike played part of the demo of the song. He said, "I made this on my phone, probably on a flight. It's "Hold It Together", so that turned into "Hold It Together" off of the Post Traumatic album. Those were all of the sounds I made, that's just my phone playing. So you get pretty far on the phone, I think it's pretty awesome."[5]

While Mike was on tour for Post Traumatic in Europe in March 2019, fans noticed Mike filming a new music video before the show in Prague as well as at the end of the show in Luxembourg. In Prague, Mike was singing in front of a camera while his bandmates Matthias Harris and Dan Mayo and touring crew ran around and waved props in the air behind him.[6] In Luxembourg at the end of the show after "Running From My Shadow", he had confetti launched on stage before walking backwards to the front of the stage and then off the stage, singing.[7] 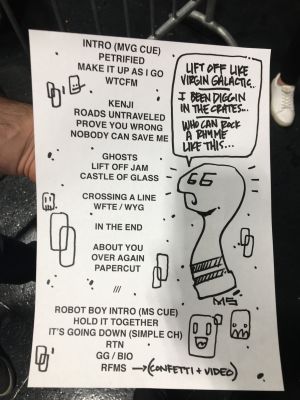 Setlist for Mike Shinoda's show in Luxembourg City, Luxembourg on March 23, 2019 showing the music video shoot note after "Running From My Shadow."

No video ended up ever being released for the song, the only one on the standard edition of the album without a music video.

In his April 9th, 2020 stream online, Mike said that the music video for "Hold It Together" was finished but the hard drive it was on was stolen at an Israeli airport on tour. The tour videographer Chady Awad (@goodguychady) was subjected to "extra screening" (Mike's politically correct way of saying it)... all of the videographer's stuff was torn up and sifted through and the hard drive was stolen during the process. He said it was hard to wrap his head around doing another video for the song unfortunately.[8]

When asked in June 2020 about the concept for the lost video for the album, he said, "That's the Hold It Together video. Some of you were coming to the shows and some of you saw us filming the video and we got so much of it done. We had this whole scene... it was this whole idea partially inspired by the Missy Elliot videos from the early 2000s, it was Hype Williams, he did all of these weird, jittery things. I was doing it in reverse, some of them we were doing takes in fast forward. I had memorized the chorus in reverse and I did this whole thing where set up this shot, we had multiple cameras shot, handheld, it was on stage and I did this whole thing where I came to the stage. So at the end of the show, the show's over, crowd's there. Then I leave the stage and then from off stage they all get in position and we did this whole choreographed thing with like streamers and lights and I don't remember what else, and me walking backwards to the stage. Played in reverse it was SO cool because I was talking to the camera and then I was doing the words and I finished on the stage. Then the streamers went back into the things, like the poppers went in. It was great, we couldn't believe it, we had one take to get it right and we got it. And then at the end of the tour the hard drive was accidentally confiscated by the airport police. We believe. We believe that what happened is that it was in Chady's bag and then all of a sudden it wasn't, and it was his mistake to not back it up. So.... it sucks. And that was just one of the scenes, we had done a bunch of scenes with the crew. And you can't recreate those moments. It's not possible. So, that's a bummer."[9] On the stream the next day, Mike was asked if he could sing the chorus backwards still, but he said that he unfortunately didn't remember how to do it.[10]

On December 9, 2020, Linkin Park fan kattoda shared a new animated video she had created for "Hold It Together."[11] The description of the video explained, "Hi! I’m kattoda and this is my very first animated music video. When I first heard ‘Hold It Together’ I immediately started imagining this story. But I never thought of actually making it into a video. Until I heard Mike saying that they lost all the footage for the Hold It Together music video. So I decided to spend my time in quarantine making this video, and I really hope you enjoy it"

Mike shared the video on his social media the same night, saying, "Wow, @kattoda_draws did a whole music video for HOLD IT TOGETHER. Watch!"[12]

The video is an interplay between Mike and Anna Shinoda with Anna helping him overcome his struggles after Chester passed away.

"Hold It Together" was debuted at the last show of the 2018 Asian tour in Singapore, where Mike missed the beginning of the synth solo during the bridge on account of him jumping around the stage during the second chorus. Somewhat sporadically, starting with the show in Moscow, Mike would mess around with the vocal samples as an intro to the song. At the Wien stop, Mike messed around with the samples at the end of the song rather than the beginning. At the Bremen show, Mike and touring drummer Dan Mayo improvised an extended outro to "Hold It Together", which they would continue expanding upon with later shows.