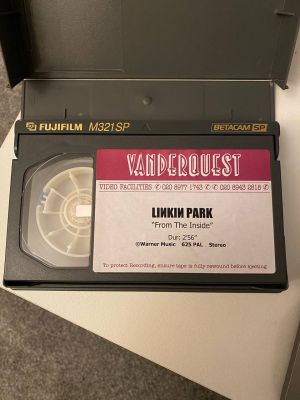 The music video for "From The Inside" was directed by Joe Hahn and shot in Prague at the same time as "Numb", but was kept under wraps until the single release. Just like with "Numb", the band worked with props and production design company Sunprops for the video.[2] It was originally made for the UK, but the band wanted to release it in the US too and considered including it as a bonus content in the Live In Texas DVD.

Speaking to MTV about the video, Chester Bennington said, "It’s one of my favorite videos that we’ve ever made. We shot it in Prague, and the kids who were working on the video were just so intense and they were doing some stuff that we would have never been able to pull off anywhere else than where we were at. The energy that [Joe Hahn] captured in that video was pretty amazing. And the visuals of it and the intensity of it all, it makes it just a really fun video to watch."[3]

About it's concept, Joe said, "It’s actually one of the best videos we’ve done. It’s about a riot that happens. We basically took over a historic square in Prague and let 400 people loose and we performed in the middle of the riot. It’s basically a display of someone’s power."[4]

During a LPU chat on November 21, 2003, Chester was questioned if the milk in the video had any significance. His answer was "Yeah the milk is a visual representation of the kind of intense power the kid released when he yelled. It's not anything like "don't cry over spilled milk." When the kid screamed there's a big sonic boom, the earth shaking, and that was a simple way to show that."[5]