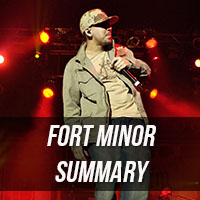 Fort Minor's touring run between August 2005 and March 2006 was brief but memorable. Starting with a pre-album promotional tour of European festivals in the summer of 2005, Fort Minor members Mike Shinoda, Tak, Ryu and Cheapshot (also of Styles Of Beyond) brought energy to every stage they stepped foot upon to perform.

A limited US tour in early 2006 was followed up by an equally short run in Asia and Australia through March 2006. For these shows, "Where'd You Go", "Red To Black", "Believe Me", "High Road" and others were added to the setlist. Friends Eric Bobo from Cypress Hill and Holly Brook joined the band on the road, performing their respective songs (and sometimes more) with Fort Minor. Mike added a full backing band to his live repertoire in late 2005, making his album really come alive on stage.

For such a limited schedule, Fort Minor's tour resulted in many late night television appearances on Jimmy Kimmel, The Tonight Show with Jay Leno and the Last Call with Carson Daly show as well as a video shoots for Sessions @ AOL and Fuse's 7th Avenue Drop. This resulted in a lot of press for The Rising Tied and the Fort Minor project, which is always a good thing.

The Philadelphia stop on their US tour which was attempted to be rescheduled but had to be dropped due to Mike Shinoda's conflicting Grammy appearance schedule for that week. Philadelphia area fans can only complain a little bit - the Grammy appearance for Linkin Park that year went down in the history books as they appeared on stage not only with Jay-Z, but Sir Paul McCartney for one of the most badass mashups ever.

Closing out their touring, Fort Minor performed at Summer Sonic in Japan in 2006, meaning Mike performed with both Fort Minor and Linkin Park in the same day - on back-to-back days! Not bad! Chester came out for "Where'd You Go" at these shows, replacing Holly Brook who at the last minute couldn't make her flight over. Previously Chester had joined Fort Minor for "Enth E Nd" at two shows (MySpace in LA and Club Tattoo in AZ), performing the Reanimation song with his fellow bandmate.   On June 19, 2015, a listing for Fort Minor on Conan O'Brien appeared online, sparking a frenzy in the fanbase. Mike confirmed the Fort Minor comeback soon enough, announcing that he was performing as a solo artist (just him as Fort Minor) and was releasing a new single entitled Welcome. After the Conan debut of "Welcome", Mike played an intimate show at Exchange LA. At this show, he debuted an entirely new one-man show as well as new mashups and live versions of songs including "Castle Of Glass/Kenji", "Waiting For The End/Hands Held High", "Devil's Drop" (from The Mall), a "Cigarettes" remix, "Until It Breaks", and "Believe Me/When They Come For Me". Wow!

For August and September's Linkin Park's European Tour, Mike announced that he'd take his Fort Minor project to Europe and perform four shows. One of these performances even came on the same stage as Linkin Park was playing, at Rock im Sektor. This was the first time he had performed a Fort Minor show and a Linkin Park show on the same day since 2006, and the first time ever Fort Minor technically opened for Linkin Park. Mike held an online poll to ask fans which song he should add to the Fort Minor setlist - "High Voltage", "Step Up", "Second To None", "Red To Black", or "Right Now". "High Voltage" won by a LARGE majority and was added to the setlist starting in Berlin, where it was mashed up with three different songs - "Suicide Music" from The Raid: Redemption through the first chorus, parts of "C.R.E.A.M." by Wu-Tang Clan through the second chorus, and the Funky Rebel Break outro from "Rebel Without A Pause" by Public Enemy.