After the Minutes To Midnight Promotional Tour ended on May 19th, Linkin Park flew to Europe to begin their first headlining tour for the album. The European Tour was a mix of arena and festival dates and was the first Linkin Park tour in Europe since 2004. 16 shows were on the tour, with one being canceled in Italy. Linkin Park opened for Pearl Jam at two festivals (2007.06.08 Lisboa, PT and 2007.06.16 Nickelsdorf, AT) and one stadium show (2007.06.13 Chorzów, SL).

This tour is notable for being the band's first concerts in several European countries, most notably Russia.

Linkin Park took the opportunity to unleash their full headlining setlist and debut several songs on this tour - Leave Out All The Rest and The Little Things Give You Away. Both were highlights for Phoenix, as he played an additional guitar part on Leave Out All The Rest to better represent the low end of the song, and sang backing vocals on The Little Things Give You Away, his first time on a microphone with Linkin Park.

After the large European Tour 2003 cancellation, Linkin Park played their first show at Pinkpop in the Netherlands on 2007.05.28. After the big show in 2004 at Rock am Ring, the band's return was highly anticipated. They drew an incredibly large crowd on 2007.06.01 and played a very memorable set.

Mike confirmed in 2006 while touring with Fort Minor that Linkin Park had planned to visit Russia, and he held true to his word when they finally played the country back-to-back days on 2007.06.05 in St. Petersburg and 2007.06.06 in Moscow. The band has visited Russia on every touring cycle since their breakthrough in the country on this tour.

On 2007.06.08 in Portugal, Brad watched Pearl Jam side stage and was quite inspired by their performance. He later said, "I was really blown away by what they do on stage -- how organic their show is ... We played [with them in] Lisbon, and we were kind of high on ourselves a little bit. Then I stood on the side of the stage, watched Pearl Jam perform, and was immediately very humbled. They seriously destroyed us. I say that in the best way possible. It was like, 'Holy crap, there's so much room for us still to grow."

This tour is also notable because it is the first time the band started working on extending No More Sorrow and Bleed It Out. Brad at the time would perform a short "ebow" tease before No More Sorrow, which eventually lead to the song getting two new intros on Projekt Revolution 2007. The longer intro stayed in the setlists until 2011. LP also started extending the bridge of Bleed It Out (find the first show this happened at), which has continued off-and-on to present day. A memorable bridge of Bleed It Out on this tour came at 2007.06.11 Zürich, where Chester and Mike split the crowd to yell "fuck yo side!"/"fuck that side!" at each other.

The label and band management unfortunately prevented several webcasts from happening on this tour. Webcasts were possible for Pinkpop, Download, Rock am Ring, and Oeiras Alive!, but the only one granted permission was Oeiras Alive! in Portugal. Since this tour, each festival show in Portugal has always been webcasted and shown on television to modern day.

Starting at 2007.08.17 Cuyahoga Falls, OH, Mike joined Styles of Beyond to perform Second To None and the Fort Minor track Remember The Name during their set on the Revolution Stage.

Starting at 2007.08.19 Bristow, VA, Chester joined Julien-K to perform Technical Difficulties during their set on the Main Stage. At 2007.09.01 Tinley Park, IL, Chester filled in for the entire Julien-K set due to Ryan Shuck having to attend his brother's wedding. Due to this change, the band dropped Systeme De Sexe from the setlist in favor of Maestro, which Chester had sung previously with the band.

At 2007.09.03 Greenwood Village, CO, Mike invited members of every other Projekt Revolution band out on Faint, to close the tour. He had Rob pause on the outro of the song so he could name off the other bands on the bill. 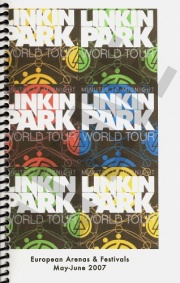