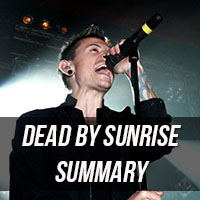 In 2005, Linkin Park fans were made aware of the existance of Fort Minor, a hip-hop side project of vocalist, guitarist and keyboard player Mike Shinoda. Two months before the release of the Fort Minor album, The Rising Tied, Chester Bennington played a benefit show for ReAct Now in Nashville, TN. Aside from performing "Home Sweet Home" alongside one of his favorite bands, Mötley Crüe, he also performed a song called "Let Down" with Ryan Shuck and Amir Derakh, which would later be released on his own album, Out Of Ashes. This was the first work people got to see of Snow White Tan, later renamed Dead By Sunrise. Fans were to discover that Elias Andra, Brandon Belsky and Anthony "Fu" Valcic had also become part of the band.

Nearly three years later, Julien-K performed at Club Tattoo's 13th Anniversary Party. Chester joined Julien-K on their song "Technical Difficulties" (as he did at other shows), and as announced, Chester and Fu joined Julien-K to perform three Dead By Sunrise songs - a debut of "Walking In Circles", a debut of "My Suffering" (which remained the only time they played the demo version live) and "Morning After", a song Chester had played previously solo (also with Linkin Park way back in 2001) and at his Bucket Of Weenies shows, which also featured Ryan Shuck on guitar.

Before the release of Out Of Ashes, later that year, Dead By Sunrise played a few more shows. The first being an all-acoustic set in Las Vegas. Later that month it was time for the Linkin Park tour. Fans were to discover that Dead By Sunrise were also performing at some Linkin Park shows, performing 3 songs as Linkin Park's first encore. These 3 song sets were played in Stuttgart, Knebworth, Gräfenhainichen, Chiba, Osaka, and Pomona. The set included "Crawl Back In" - the first time we saw this song not in acoustic, "Fire" debut and the final version of "My Suffering".

In October, Dead By Sunrise played their first eleven song setlist. This was the live debut of "Condemned", "Let Down" (studio version), "Too Late", "End Of The World", "Inside Of Me", and "20 Eyes" (a cover of The Misfits), as well as some songs to be slightly extended. Shorty after the band played various promo shows and had a few live performances on TV.

2010 saw the small Asia tour visit Japan and Taiwan with the addition of "Into You" and "In The Darkness" to their setlist, and the eight show European tour. The band was supposed to perform "Let Down" the day after the Köln show at "Die Oliver Pocher Show" but cancelled due to tiredness and were replaced with a boyband.

There were plans for Chester to join the support band, The Delta Fiasco, for one of their songs at the Hamburg show but due to stage setup, this was not possible. Before the show was an LPLive M&G with Julien-K, where we presented them with the LPLive poster. They were surprised and really appreciated the effort put into this, and said they would hang the poster up in Ryan home studio!