In late 2006, Clear Channel Music posted the entire The Rising Tied album complete with commentaries from Mike Shinoda before each song.[1] On "Believe Me", he said, "Back in like 2003, I think it was, uhm, maybe 2004, we did a tour called Projekt Revolution with Linkin Park. We do this tour every year and it gets bigger and bigger every time we do it, and at one point we had Cypress Hill on tour. And when I watched them play, they had this percussionist, his name is Eric Bobo, he’s the son of Willie Bobo, who’s a famous Latin jazz percussionist. And when I saw him play, I was like, man, you know what, if I ever get the chance to, we are going to get together, and record some music, and so obviously, when I was working on a Fort Minor project, it was a perfect excuse to get together. And, uhm, people also asked, who’s that singing on the choruses. Uhm, a lot of the songs… every song on the record, if you hear singing – I actually wrote the part, uhm, and in most cases I wanted somebody else to sing it, but this one, when I listened to it back, I thought: “you know what, this doesn’t sound, like anybody else singing it.” It just kinda had its own thing, so I just decided to leave my own voice on there."

Mike describes the song as having "this old school hip-hop foundation, but still feels new."[2] The song features 90's NYC drums, classic rock chord progression, and Latin percussion[3] as well as guest vocals by Styles Of Beyond. Eric Bobo added to the song elements that Mike wanted but couldn't play.[4]

The strings are taken from Apple Inc.'s stock sound "Orchestra String 08", which can be found in the digital audio workstations GarageBand and Logic Pro. Mike said, "this is the only exception where i used a loop from a sample library, i think. i just thought it would be fun for you all to find ha"[5]

On The Making of The Rising Tied DVD when he was helping Brad and Mike pick songs for the album, Jay-Z said about "Believe Me", "If you want to open up big, that's the record. "Cigarettes" is my favorite record, but that is the biggest record I've heard."

"Believe Me (Club Remix)" was a remix of "Believe Me" released by Mike Shinoda for free download exclusively for Fort Minor Militia members on June 1, 2006. The remix was produced and mixed by Mike. He wrote: "okay, before you listen to this, hear me out. i've said before that i can make any type of song you ask me to, and i was thinking how weird "believe me" would have sounded as a typical rap song. i went the "dirty south" route with this one--i wanted to do something fun (but a little ridiculous) with it, just to entertain myself. now you can listen to it...but make sure your system has the bass turned all the way up. play it loud." 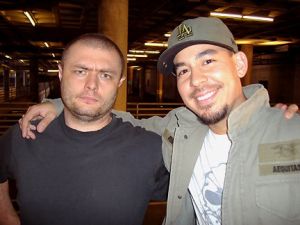 The first hint of "Believe Me" being filmed for a music video was a shot of Mike with director Laurent Briet, posted on September 9, 2005.[7] In a post on Video Static, they said, "Little Minx/Black Dog director Laurent Briet (left) with Fort Minor frontman Mike Shinoda on the set of the band's debut video, "Believe Me." Fort Minor is a new side project from Shinoda, who is also one of the frontmen in Linkin Park."[8]

Describing the music video for "Believe Me", Mike said, "He did a very different video for me. It's really clean and there's these crazy light effects. As you're shooting the video, it's like there's nothing there, so you had to imagine what's going to happen. I was very critical. I had to apologize many times for making him go back and change things a lot, but he was a good sport about it and we basically spent an extra two weeks on it. Basically from my face to the album artwork to crazy shapes that fly through the air, they're all transparent, three-dimensional light shapes that flow through the air and carry the song."[9]

Due to them having to meet a deadline, an unfinished version ended up airing in Europe and Asia before the final version was released on Briet's website. The director explained, "The video airing in europe and asia is a “first” version. We had to meet the deadline for international release, but then worked some more it. Same edit, but more refined work on the post production side. I’ll be posting a quicktime of it as soon as I get the green light from warner. Working with mike, ryu, tak, cheapshot and bobo was really great. Glad to be done, glad to be back home."[10] On the same day, Mike Shinoda explained the differences on the new version at the Linkin Park Numb Journals, "by the way, a new version of the believe me video will be out soon. it's not that different, the light effects are a little stronger and there's a cool effect in the chorus (that i won't spoil be telling you about)."[11]

The final version of "Believe Me" was posted by Briet on his website on October 17, 2005.[12] It was also included in the Fort Minor Militia DVD.

The "fake title" for the video when it was being filmed was "Black Dogs", according to Briet.[13]

"Believe Me" saw its live debut at Fort Minor's show at their performance at Myspace's 2nd Anniversary Party. It featured an extended outro that included a breakdown, giving the backup singers a chance to shine, as well as a sing-a-long part to get the crowd involved. Eric Bobo performed drums on the song. It was performed mid-set at the group's few headlining shows before "Feel Like Home" and at a few promotional shows towards the end of 2005. In 2006, it was moved down to become the main set closer, with Eric Bobo performing a drum solo as the intro to the song, then often times staying out onstage to perform the encore with Fort Minor. "Believe Me" became the closing song on the Asian Tour, Eric Bobo no longer performing with the group live. The setlists are not known for the appearances at Summer Sonic in Japan, but it is known that "Believe Me" was played - it's uncertain if it remained as the closing song, though.

The song returned in 2015 when Fort Minor made its comeback with "Welcome". For live performances, Mike put together a new remix to perform at his one-man band shows as Fort Minor. The remix features a completely new instrumental, the intro beginning with a sing-a-long for Mike to interact with the crowd with before heading into the first verse. The song's second verse is substituted out for the first verse of "When They Come For Me" for most performances; the two verses were swapped around at his show at Rock im Sektor. As a result of "Remember The Name" and "Welcome" being performed during Linkin Park's setlist, "Believe Me" also closed out that show.

Mike Shinoda did not perform "Believe Me" at all on the Post Traumatic Tour in 2018 and 2019 to the surprise of fans. When questioned about if he could play it at future shows in June 2020, Mike said, "I could, yeah. The thing I felt about that one, was the verses on Believe Me were all tied together conceptually. I want to do solo-solo shows, not all alone, but I want to do them like... it's my vision and my show. I didn't want to bring out Styles of Beyond or anybody else. I didn't want anybody else doing their vocals if I didn't have to. It's mostly about that. I can't just do my verses and then do the choruses, that's weird. I didn't know how to do that very well and have it presentable. I could rap their parts, but I thought that was... I don't know."[16]