Difference between revisions of "Amends"

Amends is an upcoming remix album by Grey Daze composed of Chester Bennington's vocals from the 90's over newly recorded instrumentals. "What's In The Eye" was released as the first “fan track” from the project on January 17, 2020 and was co-produced by Chris Traynor, Kyle Hoffman and Jay Baumgardner. The first single, "Sickness" featuring Page Hamilton, was released on February 6th.[1]

Tentatively titled New Sun Tomorrow,[2] the project was started in February 2017[3] when Chester and Sean picked about four songs to recut and sent new guitarist Cristin Davis into the studio to work on them.[4] The album was announced in June by bassist Mace Bayers as a remaster of ...No Sun Today they would be working on with Sylvia Massy.[5] The band had previously tried to release a remastered version of the album through Artemis Records in 2003 but conflicts with lawyers within Linkin Park's label Warner Bros. Records prohibited the release.[6][7]

The news came with the announcement of a Grey Daze reunion show at the Marquee Theatre in Tempe, AZ.[5] According to Sean, it was Chester's idea to put the band together for a Club Tattoo 20th anniversary party.[8] Jason Barnes, who played guitar on Wake Me, was announced as part of the band's line-up for the show and was seen recording in the studio.[9][10] They had just started to strip the masters down and re-track guitars[8] and planned on sending the producer on tour with Linkin Park so Chester could record vocals,[4] however, the project was put on hold following his death on July 20th.[11] 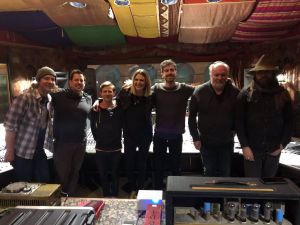 Grey Daze was given permission by Chester's widow, Talinda, to continue working on the project granted that they didn't change Chester's voice.[4] In late December, Sylvia confirmed the sessions would be resumed. According to her, the music would be modernized for the current market using master tapes recorded in the late nineties.[12] Sean said, "We reverse engineered a lot of the music. We took all the music away, we kept the vocal track and the lyrics that was there - that was all Chester. We kept the integrity and the intention of all of the vocals, intact from its original inception. We actually rewrote all of the music to every single song from the ground up."[13] Besides Chester's original vocals from Wake Me and ...No Sun Today, previously unreleased alternate takes were also used on the songs.[14] The band did not move foward with Sylvia Massy[8] and Jason Barnes was absent from the project after 2017.

Sean was encouraged by Rene Mata to make it something special for Chester's fans with a wide release and helped connect him with producer Jay Baumgardner who helmed the final product.[4] They also had Esjay Jones and Lucas D'Angelo in the production team.[15] The band then reached out to former Warner Bros. Records executive Tom Whalley to release the album through his Loma Vista Recordings.[16] They worked at Salt Mine Studios and NRG Recording Studios with several musician friends of Chester or artists that he loved which included Ryan Shuck (Julien-K), Marcos Curiel (P.O.D.), Jaime Bennington (Chester’s son), Chris Traynor (Bush), Brian “Head” Welch and James "Munky" Shaffer (Korn),[17] LP (Laura Pergolizzi), Carston Dowdell and Brennen Brochard (Sean's sons), Heidi Gadd,[18] Carah Faye (Shiny Toy Guns) and Jasen Rauch (Breaking Benjamin).[8] On June 9, 2019, Grey Daze confirmed they had wrapped up the project[19] and by August they had mixed the album.[20] Draven Bennington was also asked to sing on the album but declined because it was difficult for him to listen to his father's voice at the time.[21]

The album title was taken from the lyrics of "Morei Sky". Sean said, "After Chester passed, being a close friend, you carry this amount of guilt, like, ‘What did I miss? What did I not see? How could I have let this happen to my friend? How could I have prevented this?’ You go through these emotional roller coasters. And then you read those lyrics and go, ‘How the fuck did I not see he was in such a dark place?’ It’s one of those things where it sheds a little bit more light onto who he was deep down and the thoughts that went through his mind." According to him, they have enough material for one or two additional Grey Daze albums which might be released if Amends gets a good response. Some proceeds from the sales will benefit Talinda's 320 Changes Direction and other portions of the proceeds have been allocated for Chester's kids.[4] 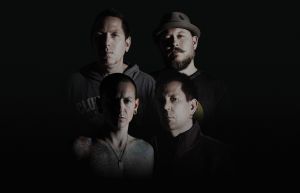 In an interview to KROQ, Sean said the band wrote around 150 songs all together in the "6 and a half years" they were together and recorded 3 full-length albums but only two were actually released, so they had 3 albums worth of material.[23]

About the sound of the album, he said, "Almost every song on the album sounds like a song that would have been written and recorded this year, that is the biggest difference. We took the old grunge feel and kind of twisted that into keeping the angst and aggression that we had without disrupting or distorting the rock sensibility that we were known for and had developed with Chester."[8]

"Hole" was rumored to be in the tracklist as well since it was previewed (along with "In Time") by Sean Dowdell in July 2018 while filming a mini documentary about the band but it didn't make the album.[24] When questioned about it, Sean answered "it didn’t make the cut for the record" and Cristin said "Hole will be on the next record."[25] "Spin" was also heard during a video Grey Daze posted in December 2018 from the The Saltmine Studio Oasis.[26]

It is currently unknown which guests are featured in each song, but it has been confirmed that "She Shines" features Brian "Head" Welch, "Soul Song" features Jaime Bennington, "Sickness" features Page Hamilton,[4] "In Time" features Ryan Shuck,[27] "B12" features Munky and Head from Korn, "The Syndrome" features Carah Faye, "What's In The Eye" features Marcos Curiel, "Shouting Out" features LP, and Chris Traynor is featured in five songs including "Soul Song", "Just Like Heroin" and "What's In The Eye". According to Sean, it was actually Chester who introduced him to LP, with her song "Lost On You", and they wanted a female singer for "Shouting Out" so he decided to call her.[23] Heidi Gadd contributed strings on 2 songs[28] and Brennen and Carston played drums on a song each.[8] 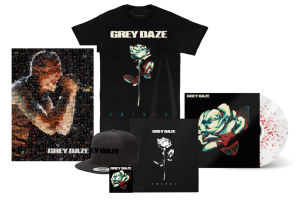 Pre-orders for Amends started on February 06, 2020. The album was released on April 10, 2020 in digital, CD and vinyl formats through Loma Vista Records in the United States, Concord Records in the European Union and Virgin Records in Japan.

The first pressing of CDs were packaged in 16-page case-bound books including lyrics and band photos.[29] Saturn's and Target's exclusive edition of the CD features acoustic versions of "What's In The Eye" and "Sometimes" as bonus tracks.[30][31] A deluxe SHM-CD+DVD first press limited edition was released in Japan and includes a bonus track.[32][33] An Amazon exclusive edition of the SHM-CD+DVD was packaged with a Deca Jacket.[34]

Two different limited edition color vinyls were available at Grey Daze's official website: a red vinyl[35] and a deluxe edition bone-white + apple red splattered color vinyl limited to 3.5K numbered copies worldwide which was exclusive to the Grey Daze store. This deluxe vinyl includes a 60-page book with never before seen band photos and ephemera.[36] A limited sea blue vinyl was available exclusively at JB Hi-Fi and Saturn.[37][38] Three different picture discs were also available in the official Grey Daze store, one of them being "Spotify Fans First" and limited to 1000 copies. This last edition features a previously unreleased photo of Chester Bennington from the Ve'cel photo session from 2007 by Robert Kuen.[39][40] A regular black vinyl with inner sleeve as lyric sheet was available exclusively in the European store.[41]

Various bundles with varying items were available. The "Complete Amends Bundle" included: Limited Edition LP + CD Photobook, Amends T-Shirt, Amends Tote, Limited Edition Chester Mosaic Poster, Amends Patch, Grey Daze Logo Baseball Hat and Digital Album.[42] The digital album in the US store was exclusive to United States residents,[43] but the UK store also offered the Complete Amends Bundle and a digital version of the album.[44] The main photo of Chester in the mosaic poster was taken by Jim Louvau at a Linkin Park show during Projekt Revolution Tour 2007 and was previously used by Linkin Park in the LP Underground 6.0 newsletter. After fans pointed it out, all bundles with the poster were removed from the store, including the Complete Amends Bundle.

In December 2019, Grey Daze started releasing statements from Chester's family and bandmates about the album.[3][45][46][16] On the first day of the year, Grey Daze was featured on an article by Revolver titled "45 Most Anticipated Albums of 2020" which accidentally leaked the title of the album. It was edited out later.[47] Just like Linkin Park, Grey Daze enlisted ambassadors to help promoting the album but they were told not to make it public that they were ambassadors.[48] Universal Records held private listening parties in various countries in early January 2020. The band was featured on the cover of the January edition of Kerrang! with a special article about the album.[49] On January 17, the band released the first track from the album, "What's In The Eye".[50] On January 23, Loudwire released an exclusive 8-minute documentary on the making of the album featuring interviews with band members, producers, special guests and Chester's family.[51] An lengthy article about the album was posted by Rolling Stone on February 3rd featuring interviews with Sean Dowdell and Talinda Bennington.[4] The first single, "Sickness", was released a few days later on February 6th with an accompanying music video.[52]

While the majority of fans were thankful and excited for being able to hear new material featuring Chester Bennington,[53] members of Grey Daze were also heavily criticized for the way the album was advertised by Loudwire and Kerrang! as Chester's "lost album" which fans considered dishonest and deceitful. The band was also criticized for partnering with Chester's maternal family and his ex-wife, Samantha Bennington, all of whom had previously directed attacks towards Linkin Park's Mike Shinoda and Chester's widow Talinda Bennington-Friedman.[54][55][56] While working on the album, Sean Dowdell had denied Samantha's claims and attacked her online.[57] Sean was also criticized for the way he portrayed Chester's feelings towards Linkin Park's music and the way he spoke about the band's label, Warner Bros. Records.[58][59][60] Following the backlash, the band started removing all negative comments from their social media accounts.[61] On Twitter, they wrote, "There is nothing contradictory on our posts. We told the world that we don’t care about the family fued. It has nothing to do with the music."[62]

Reception of the first single, "What's In The Eye" was mixed, with many fans praising the new sounds and layers added to the song while others felt the overall production of the track wasn't good.[63][64][65][66][67] However, fans praised the production on the second single, "Sickness".[68][69]