A Thousand Suns+ is an international live DVD release by Linkin Park in 2011 titled Live From Madrid. The DVD (packaged with the normal A Thousand Suns CD) combo was released at varying times in spring and summer 2011 during the A Thousand Suns World Tour and features songs performed from Hybrid Theory, Meteora, Minutes To Midnight, A Thousand Suns, as well as single "New Divide". 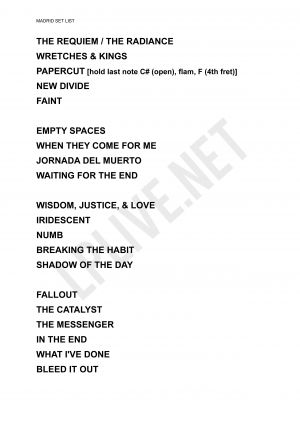 A Thousand Suns+ features a full set of eighteen professionally mixed and mastered songs from the band's show in Madrid.

Before the show, Linkin Park performed an extended soundcheck which was done in front of fans who had arrived hours before the show, a rare move for Linkin Park at the time. Fans were treated to the first portion of the setlist during the soundcheck as well as several renditions of "Waiting For The End".

The performance featured a unique stage setup and design used only for this show, completely different than the "V" stage production that Linkin Park was using in 2010-2011.

At this time, Linkin Park was getting ready to debut multiple headlining setlists at the end of the European Tour. At this show, they performed a shortened setlist of the main set they were using on the tour at the time which opened with "The Requiem" and "Wretches & Kings".

Notable changes for this show's setlist which differed from the main touring set at the time included "Jornada Del Muerto" being listed on the set but being dropped for an unknown reason. Songs that were usually performed in the set were dropped likely due to time constraints - "Given Up", "No More Sorrow", "Crawling", and "One Step Closer". The band likely chose to drop these songs in order to keep as many A Thousand Suns songs in the set as possible for the one-off show.

A Thousand Suns+ was not released in the United States and was only released internationally.

"Wisdom, Justice, And Love" was edited out of this release due to licensing issues with the MLK Jr. family. This is the only song missing from the official release. Additionally, different camera angles were used (versus the satellite feed that was uploaded by fans) and the audio was mixed professionally. The DVD includes a folder with the audio of the show in 192kbps and also has a "Robot Boy" instrumental/remix piece in the credits.

The show's video satellite feed was recorded by fans and shared widely before this release. Its total length was 74:55 mins and featured the full, unedited show (including "Wisdom, Justice, And Love").

Includes MP3 of the show.