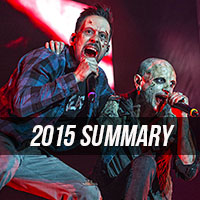 After three proper tours in 2014, two being for The Hunting Party, Linkin Park geared up for 2015 by rehearsing for their second North American Tour for the album. Taking LP across the USA and Canada, The Hunting Party North American Tour was the followup to 2014's Carnivores Tour and allowed them to play in "B" cities (or, cities that rarely see the band). A record four shows in Canada, plus the 13th LPU Summit were scheduled for the tour, with openers Rise Against (whom LP had been trying to tour with since at least 2007) and their friends in Of Mice & Men.

The tour kicked off in Orlando, FL on January 15th to a packed arena, a city Linkin Park hadn't visited since Summer Sanitarium 2003. Surprisingly, "Rebellion" and "Until It's Gone" were completely dropped from the setlist, but the band more than made up for it by bringing back two of the biggest fan-favorites in their catalogue - "From The Inside" and "A Place For My Head". Even with two setlists, both songs were in both Set A and Set B, and with a new lighting director, A+ sound, and a renewed sense of energy from the band, it seemed that this tour was going to top Carnivores Tour from the previous year.

All of that came screeching to a halt when Chester went for a layup in a friendly game of basketball with Of Mice & Men and Linkin Park before the Indianapolis show and accidentally landed on a water bottle, breaking his ankle. He managed to play the show that night on crutches, but the band immediately canceled the following two shows in Pittsburgh, PA and Albany, NY so he could get it checked out. Sadly, the break required surgery and while the crew and staff were on their way to the next show in Atlantic City, NJ, the rest of the tour was canceled. It would be the fourth arena tour in a row (2004, 2008, 2011, and 2015) where Chester required the band to cancel shows. With sixteen shows canceled, and no makeup dates planned, the band headed home so Chester could recover.

Chester's next test was the Stone Temple Pilots tour in April, which was announced after the cancellation. He made it through the fifteen show tour with his ankle doing fine, even though he later admitted the first few shows caused him massive pain and he would have to put his foot in an ice bucket directly after the show. With several hair color changes (pink for his daughter, and then blonde) and a heavy, long setlist, Stone Temple Pilots nailed the tour and Chester proved he was good to go once again.

So Linkin Park was ready for their summer shows, which sadly only included nine shows across the USA, Canada, and Mexico in two months time. Fortunately for the fans, they debuted "A Line In The Sand" at Rock In Rio USA and brought out a new setlist, which was played in full for the first time at Rock On The Range. "Papercut" returned to open the show with a new intro, "Breaking The Habit" was played for the first time all touring cycle, "Rebellion" returned for the first time since 2014, part of "Darker Than Blood" was debuted live as an intro to "Burn It Down, and "From The Inside" stuck around.

These festivals were the first time in the band's career that they decided to play the "big" U.S. festivals, and they capped it off with a return to Mexico for two shows, and a Canadian festival appearance. The very first show in June was supposed to be a Live Earth event in New York, but it was canceled by the organizers before it was officially announced....it would have been Linkin Park's second Live Earth show (after 2007 in Tokyo). For these setlists, "Rebellion" and "Points Of Authority" swapped spots in-and-out, and Mike added "Welcome" to the set starting in Mexico as Fort Minor had just returned from their ten year hiatus. "Guilty All The Same" was dropped and Mike admitted in an LPU chat that it was due to Brad and Rob both injuring themselves while performing the song. Finally, "Crawling" returned in full for the first time since Download 2014, for both shows in Mexico, but only stuck around for the two Mexico shows.

Unfortunately, the show in Pryor, OK at Rocklahoma was canceled due to an incredibly bad thunderstorm and flooding, so the band’s first show in Oklahoma since 2008 did not end up happening. With limited production and shorter-than-usual setlists, fan reaction to the festivals was mixed. The band elected to not use an encore at any of the shows and performed just a ninety minute setlist instead of a normal headlining setlist.

A China Tour was finally confirmed to happen in July, and the band took the tour to China where they debuted massive, new production in a run of five stadiums. These were some of the largest headlining shows Linkin Park had ever played in their career, and they all went off without a hitch. The band was banned in China in 2011 for meeting with the Dalai Lama, but everything was finally sorted out for this tour to go ahead. "Rebellion" had to be dropped and all songs had to be "approved" by the government first, but the setlist remained the same minus the one song being dropped. This was the first tour to not feature LPU Meet & Greets at every show due to logistical issues, but the band did manage to meet fans at a few shows thanks to LPU Meetups events and Joe's two after-show DJ sets at clubs.

In August, Linkin Park closed the touring cycle for The Hunting Party by playing ten shows across Europe. They made their debut appearance in Belarus and visited familiar locations in Germany, Poland, Italy, and more. The setlists predictably stayed the same, but with "Rebellion" included. This tour saw Linkin Park play to massive crowds, including their first time at Pukkelpop, FM4 Frequency, Rock in Roma, and several German festivals. This was the first time since 2003 that the band toured Europe in August instead of the usual June-July time period.

At the final show at Rock in Roma, Linkin Park became aware of the death of a fan named Alessandro, who organized the big flashmob during "Final Masquerade" at the show. Alessandro unfortunately passed away in a car crash before the show and Chester gave a huge speech about him during the encore break to the Italian crowd. He dedicated the rest of the set to Alessandro, which caused the fans up front to start yelling for "A Place For My Head"...Alessandro's favorite song. For the first time ever, Linkin Park played a song on the spot as a request for a headlining crowd....impressive!

During the European Tour, Mike decided to play a few Fort Minor shows. Copenhagen was the location of the first one at a venue LP headlined in 2001, with Berlin following the night before Linkin Park's Berlin show. The Berlin show was at Kesselhaus, the venue where Linkin Park kicked off the 2007 world tour for Minutes To Midnight. Next, he added Fort Minor to the Rock im Sektor in Germany, the first time Fort Minor has opened for Linkin Park since 2006. And finally, he ended it with a show in London after the final Linkin Park show of the tour.

Linkin Park entered the studio directly after the European Tour ended to start work on their new album. At the same time, Chester embarked on his final tour with Stone Temple Pilots, a combined headlining and festival run across the eastern part of the country. The band finished the year by playing three events in November - Monster Mash in Tempe, AZ, where they dressed up like zombies for Halloween, BlizzCon in Anaheim, CA, and a 10 year celebration of Music For Relief at Relief Live! in Los Angeles, CA. Standard setlists were played at the first two shows, but the Relief Live! event featured a shortened twelve song setlist with guests Adrian Young from No Doubt on "What I've Done" and "Numb", Page Hamilton from Helmet on "Bleed It Out" and "Faint", and Mark Hoppus from Blink 182 on "Numb". 30 shows in total were played in 2015.