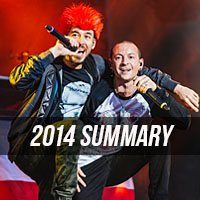 After ending the Living Things World Tour in 2013 and playing just 17 shows throughout the year (their shortest year of touring ever in support of an album) so that they could work on new music, Linkin Park returned to action in 2014 for their latest album The Hunting Party.

Although a substantial amount of new music was recorded in 2013, the band took the opportunity to work throughout the first half of 2014 to finish the album. In January, they held a unique Concert For The Philippines event in Los Angeles, CA and used the show to also headline a concert in Las Vegas, one of their most frequented cities in the world, and play a special, invite-only performance for Harman. Unfortunately, Chester fell ill just before these shows and with three shows in three days scheduled for the band, it did not look good.

The first show for Harman was a 14 song setlist (originally designed to be the Concert For The Philippines setlist too) that featured the live debut of "A Light That Never Comes". Although an LPU Meetups event was being held down the street, a few fans luckily were able to gain their way into the show to see the performance. The next night, the headlining show at The Joint, had a full set that incorporated "Wake" back into the setlist for the first time since 2008. Sadly, "A Light That Never Comes" was dropped from the encore due to Chesters illness and the full version was never played again! Finally, the Concert For The Philippines event was a 12 song setlist with quite a few guests The Filharmonic, Ann and Nancy Wilson from Heart, and Travis Barker from Blink 182.

A few months later, European dates for the summer began to be confirmed and a 9 show tour in Europe along with a Tucson, AZ warmup show shaped up. These setlists featured different Acts for the first time in Linkin Park history, and had many mashups that combined the show into one full experience from start to finish. "Guilty All The Same", "Wastelands", and "Until It's Gone" were debuted live at this time. Notably, a small portion of "Robot Boy" was played for the first time, and Mike and Joe both had their own solo portions of the show.

With returns to Poland and Italy highlighting the European festivals and huge headlining shows, including the last performance at Rock am Ring ever, Linkin Park closed the tour at Download Festival in the UK. This show was the first and only time in the bands history that Hybrid Theory was performed live in full from start-to-finish (at least one show in 2001 had the entire album played, ironically it was in London). Thankfully, even though DSPs/live recordings were not released by the band after 2012, the Download show featured a FLAC and mp3 release to fans who preordered The Hunting Party from linkinpark.com. This show was the first time that "By Myself" and "Forgotten" had been played live in over a decade, and featured notable returns of "Cure For The Itch" (first performance in full ever of the studio version) and "Pushing Me Away".

Back in LA, fresh off of the European shows, the band booked four promo shows around their hometown for the release of the album the Red Bull Sound Space, the iHeartRadio Theater, Jimmy Kimmel Live, and a surprise Vans Warped Tour performance in Ventura, CA. Although Jimmy Kimmel was canceled, Linkin Park fit those three songs in after the iHeartRadio Theater show (after a break at the end of the show). The Vans Warped Tour show was a complete surprise up until the day of the performance and was a 7 song setlists with guests on every song. The singers from Yellowcard and A Day To Remember, and many more, joined the band for their packed set on a newly-built Main Stage that was just for Linkin Park that day. Notably, this was just the second performance of "A Place For My Head" in 2014 out of three total times it was played during the year.

Warming up before their large summer tour with 30 Seconds To Mars and AFI, Linkin Park played the mtvU Fandom Awards at Comic Con in San Diego for their only show in July. Arguably the best proshot videos of the year came from this show, especially for the newer songs off of The Hunting Party.

Carnivores Tour kicked off in West Palm Beach on August 8th. Although the first show was shortened due to a mysterious back injury for Chester (prompting the band to come on stage a full hour late and with a greatly-shortened setlist), the rest of the tour went off flawlessly and brought huge crowds throughout North America. The setlist was changed slightly from Europe and a second one was also debuted, with a few changes. Notably "Dirt Off Your Shoulder/Lying From You" was played in an abbreviated form for the first time ever by just Linkin Park (without Jay-Z), and fan favorites "With You", "Somewhere I Belong" and "Points Of Authority" stuck around throughout the setlists. Remixes such as "Castle Of Glass" remained highlights in the show. For this tour, "Rebellion" and "Final Masquerade" were debuted live. Notable venues on this tour were Parc Jean-Drapeau, a large open field in Montreal where the band had not played since Summer Sanitarium 2003, The Gorge Amphitheatre, a large open-air venue overlooking the Gorge in Washington state that Linkin Park had not visited since summer 2001, and the historic Hollywood Bowl venue in Los Angeles for the first Linkin Park appearance there ever.

The LPU took the opportunity on Carnivores Tour to hold TWO Summits for the first time in the fanclubs history. Darien Center, NY and Woodlands, TX were the two lucky cities and had the usual Summit activities as well as exclusive acoustic performances of "Final Masquerade". After a much-needed month off, two festival shows in Brazil were next on the schedule for the band at Circuito Banco do Brasil. Sadly, Brad could not make these shows due to an ear infection and his new guitar tech Benjamin Chandler (formerly the guitar tech for Deftones and Crosses) stepped in for him and performed extremely well. These two shows were in locations in which Linkin Park had never played before Belo Horizonte and Brasilia. Just after these shows, Linkin Park played Guitar Center Sessions in Los Angeles (with Brad returning) at The Wiltern and then the Stars Of The Season private event in Scottsdale, AZ.

To close out 2014, a full-fledged European Tour of sixteen shows took the band across a few countries in Europe. Linkin Park set a record for their band with nine shows just in Germany....and they sold them all out. Incredible! The tour also hit Switzerland, Austria, France, England, and a rare appearance in the Netherlands. The 12th LPU Summit was held in Amsterdam, Netherlands (which was also a sold out show) on November 7th. LP treated fans to a rare Summit soundcheck of "Burn It Down" (Reggae Version), which had only been performed once before at a private KROQ rehearsal at Third Encore before the Sunset Strip Music Festival show (August 2013). And after that song, "A Place For My Head" was played! Surprise! Closing out the tour in London, the band invited fans on stage for "Bleed It Out" to dance around and have a good time.

In December, Linkin Park played two radio shows in California, one in Oakland and then KROQ Almost Acoustic Christmas in Los Angeles. They shortened the setlists for these shows, opening with "Joe Solo Medley" into "Burn It Down" for the first time ever. With Tim McIlrath from Rise Against joining them for "Bleed It Out", Linkin Park was ready for the next run of dates in early 2015 as The Hunting Party Tour returned to North America.

2014.06.19 Los Angeles - Reason: Due to a change in the production schedule at Jimmy Kimmel Live.