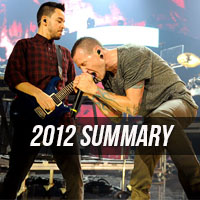 After 2011's last show in Singapore at the Formula 1 Grand Prix on September 25, Linkin Park did not return to the stage until nearly eight months later in May 2012. Armed with a new album entitled Living Things, the band ran through a series of rehearsals at Third Encore in mid-May to prepare for their upcoming world tour.

In a nice twist, the band decided to perform their first full show 2012 show at the intimate House Of Blues Sunset Strip venue in Hollywood just for LP Underground members. Billed as a Music For Relief / Power The World benefit show, LPU members were treated to a brand new setlist that featured the first performance of "With You" since 2006, the first "Runaway" performance since 2007, and the first studio version of "Points Of Authority" since March 2004! Another notable setlist change was "Bleed It Out" being mashed up with the Beastie Boys' "Sabotage" - an instant fan favorite.

The first full tour for Living Things came later in May as the band flew to Europe to play a mix of festival shows, headline shows, and one TV performance. At the first stop in Lisbon at Rock in Rio, another new setlist was debuted that featured "A Place For My Head" for the first time since its one-off 2010 performance in Paris for the Hybrid Theory 10th Anniversary but it also opened the show for the first time since 2001. LP headlined Rock am Ring and Rock im Park for the first time since 2007, and an intimate show on June 5th at Berlin's Admiralspalast was filmed for the Living Things concert event in US theaters (June 25, 2012). That show featured the same setlist as the House Of Blues show in May, so both the "headline" setlist and the "festival" setlist were used for the remainder of the tour.

The band did not appear live for the rest of June and all of July other than a few promo appearances in Japan and California, but in early August SiriusXM held a "Town Hall" show (11 songs) at Third Encore and "Lost In The Echo" was debuted for the first time.

The Honda Civic Tour, headlined by Linkin Park with Incubus and MUTEMATH supporting, ran for one month - from August 11th to September 10th. In another unique move, the band invited about 30 LP Underground members (along with some radio winners) to the first stop of the tour in Bristow, VA the day before the tour started to witness a rehearsal for the tour as well as to attend a Meet & Greet. Debuted that day was a mashup of "Victimized" with "QWERTY" (not played since 2007) and a "medley" of "Lying From You" and "Papercut". A new "Game Of Thrones" intro to "With You" was played, and the next day "With You" opened the first show of the tour - its first time opening since March 2004. A brand new setlist was played, with "In My Remains" getting its live debut after being rehearsed the day before, and "Empty Spaces" / "When They Come For Me" returning. After repeating the same setlist in Uncasville (the band traditionally plays new setlists twice in a row before rotating them), Mansfield featured a new version of the House Of Blues setlist - with "Runaway" and "Blackout" being dropped for "Lost In The Echo" and "Victimized (w/ QWERTY)". After a few changes (adding "Lying From You" in full and moving "Numb" out of the encore) at the next show in Wantagh, the Camden show featured the final new setlist of the tour - a variation of the "festival" setlist from Europe. A brand new (instant fan-favorite) encore was added to this setlist of "Tinfoil", "Faint", "Lying From You / Papercut", and "One Step Closer". It was the first time "Lying From You" had been in the encore since 2004.

The sixth LPU Summit was also held in Camden, which featured the band playing "In My Remains" and "The Messenger" acoustically for the LPU'ers. The long-awaited collaboration between Linkin Park and Incubus sadly came over halfway through the tour, with Incubus's Mike Einziger coming out on "Bleed It Out" after the "Sabotage" bridge and shredding a guitar solo. Unfortunately, Brandon never joined Linkin Park for a song and Chester never joined Incubus for a song! Three shows in western Canada (a very rare stop for the band) came in September. While Vancouver was last played in 2004 on the Meteora World Tour, it was the first show in Calgary and in Edmonton for Linkin Park.

A stadium show at the Home Depot Center in Los Angeles was held near the end of the tour, the largest venue on the Honda Civic Tour as it was the hometown shows for both Linkin Park and Incubus. It turns out that the stop was the highest grossing Linkin Park show ever. The show was broadcasted live on AXS TV and fans were able to watch worldwide on the Internet. After the tour, Linkin Park played in Mexico for the first time in over 10 years (since 2002) and played MTV World Stage in Monterrey and then a show in Mexico City. Finally, Linkin Park played the iHeartRadio Music Festival in Las Vegas in late September with a 10-song setlist featuring several medleys of partial songs and a few full songs.

The return to South America, last visited in 2010, was in October and Linkin Park played Buenos Aires, Argentina and four shows in Brazil (São Paulo, two nights in Rio de Janeiro, and Porto Alegre) with the setlists from the Honda Civic Tour. After that, the band went to South Africa for the first time ever and played packed stadiums in Cape Town and Johannesburg in November. The seventh LPU Summit was held in Cape Town and fans were able to watch a seven song soundcheck before the show. To close out the year, "Castle Of Glass" was debuted and played at VGA 10 in December, and the band returned to KROQ's Almost Acoustic Christmas show (last played in 2007) with a 14 song setlist and "Lost In The Echo" opening for the first time.