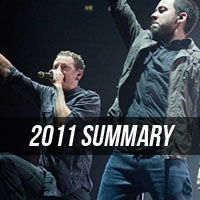 On January 20th, 2011, Linkin Park kicked off their first North American Tour since Projekt Revolution 2008 in Sunrise, Florida. An extensive hour and a half rehearsal that was attended by roughly 50 fans (and notably was missing Brad due to him being sick) and featured most of A Thousand Suns and a few other songs was the closest the band has come to performing the full A Thousand Suns album in one day. The only song not played at either the tour rehearsal that day or the show that night was "Robot Boy", which has never been played live. After the first three shows, Linkin Park debuted a new setlist in Detroit on January 25th that opened with "New Divide". New setlists then followed over the course of the next few shows. A third LPU Summit (another scaled down one) was held on the 26th in Chicago. Activities were held the previous day around the city like at the first London Summit and fans were treated to a Linkin Park rehearsal of "Burning In The Skies" and a few takes of "Blackout".

The band played their second show at Madison Square Garden in New York City (the first coming in 2008) on February 4th and played Saturday Night Live the day after (also for the second time - the first in 2007). "Waiting For The End", "Empty Spaces", and "When They Come For Me" were performed on SNL, the latter two being in black and white on TV - a first for Saturday Night Live. After the Toronto show on February 8th, Chester tweeted that he felt very sick. The next three shows (Washington D.C., Uncasville, and Cincinnati) ended up being canceled, and the two after Cincinnati - Houston and Dallas, ended up being rescheduled for the end of the tour. Finally on February 19th, the tour resumed again in Las Vegas, but not before Chester had unfortunately caused the band to cancel shows on their third North American winter tour in a row (2004, 2008 and 2011). At a M&G in St. Paul on January 28th, the band said they wouldn't be letting fans play guitar on "Faint" on the tour. On February 22nd in San Jose, Mike's keyboard broke mid-show (not the first technical difficulty on the tour) and the band played an improvised version of the "Iridescent" chorus a few times followed by "The Messenger" until they had another keyboard on stage.

After taking a break for the next few months, LP played the KROQ Weenie Roast in Irvine on June 4th and BFD 2011 in Mountain View on June 5th before going to Europe to start a 17 show tour featuring festivals, arenas, and more. Projekt Revolution returned for the first time since 2008 and was held in four cities: Helsinki (the first time it had ventured to Finland), Leipzig, Oberursel, and München. On June 21st in Hamburg, Linkin Park hosted their fourth LPU Summit at O2 World. Fans were treated to acoustic performances of "Rolling In The Deep" (an Adele cover, by Mike and Chester) and "The Messenger" (Brad and Chester). On the 23rd, LP played Red Square in Moscow for the Transformers 3 Premiere. They opened the show with "New Divide" with a new Transformers-like intro and performed the "remix" of "Iridescent" for the only time. During "Wisdom, Justice, And Love", fans flash mobbed the band by holding up thousands of signs saying "Wisdom", "Justice", and "Love". The show on June 28th in Norway was the first time the band had played in the country and the next show on the 30th at Rock Werchter was the first time LP had played in Belgium since 2001.

The shows on July 1st and July 2nd in France and Switzerland were the first full shows to not have "One Step Closer" played in over 10 years. Also during this tour, the band started randomly not using encores during their performances, most notably at their festival shows. LP closed the European Tour on July 4th in London by playing the iTunes Festival at a smaller venue - the Roundhouse. The show was webcasted worldwide on iTunes for fans to watch. Due to a request to play it by iTunes, Mike and Chester opened the encore by playing a piano version of the "Rolling In The Deep" cover.

On August 30th, Linkin Park played a one-off show at The Joint in Las Vegas, where "Cure For The Itch" appeared in the setlist for the first time since 2008. The next day in Los Angeles, they played the Mayan Theatre for a Music For Relief benefit show with B'z opening. Over $330,000 was raised for the organization Save The Children by Linkin Park and B'z fans. A week later, the Asian Tour for A Thousand Suns kicked off in Hong Kong. 11 shows across Asia (with five in Japan) were played on this tour. Linkin Park held an event called "A Thousand Horizons" in Tokyo on September 9th as a part of the LPU Summit. Chester showed up at the location to sing "The Messenger" over a pre-recorded instrumental for fans. Over the course of the next two days, September 10th and 11th, the fifth LPU Summit was held in Chiba at the Makuhari Messe.

On September 23rd, Phoenix was unable to play a show (the first time a band member has missed an Linkin Park show) in Bangkok due to food poisoning, so his bass tech Ted filled in during the show for him. It was the first time a tech has played on stage since Hindmarch 2007, when Kurt played guitar on "Shadow Of The Day" because Chester's wrist was broken. The tour ended on September 25th in Singapore, where Linkin Park played the Formula 1 Grand Prix for the second time, the first being in Abu Dhabi in 2010. A new setlist at the show featured "One Step Closer" in the third spot with "New Divide" and its Transformers intro opening the show for the first time since Moscow earlier in the year. The last show of the year, the DeLuna Festival in Pensacola, FL on October 16th, was canceled due to Chester having to undergo surgery.