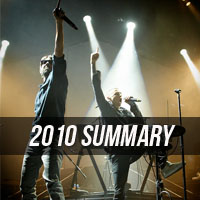 At the beginning of 2010, Dead By Sunrise headed to Japan to do three shows in Japan in January and did eight shows in Europe in February. Other than that, after not hearing much from the band during 2010, dates in June were leaked via a Rock am Ring advertisement for a fall LP tour in Europe. The dates were later confirmed, and we started having an influx of information about tours, a single and a new album - A Thousand Suns.

In September, Linkin Park kicked off the world tour for A Thousand Suns by playing a few shows around LA - the Kevin & Bean Breakfast Show and the MTV VMA's (on top of the Griffith Observatory) - and an album release show in New York City on September 14th. Highlights from these performances include debuts of "The Catalyst", "Waiting For The End", "Iridescent", "Wretches And Kings", and a few interludes off of the album. After that, they embarked in October to South America, a place they haven't played since September 2004 in Brazil. Playing three shows in five days, the band hit Argentina, Chile and Brazil, debuting a brand new setlist for the tour on the way. Opening with "The Requiem" and "Wretches And Kings", the 25 song set featured 12 new songs from A Thousand Suns mixed in with old singles and fan favorites. After closing with "What I've Done" for the first time at the first four shows of the world tour (New York City through Santiago), the band moved "Bleed It Out" to the end of the set in Brazil, closing with it until they started rotating setlists again.

On October 20th, Linkin Park kicked off their first European Tour for the album by playing in Berlin, Germany. On the 25th, one day after the 10th anniversary of Hybrid Theory, the band played (an unrehearsed) "A Place For My Head" to celebrate near the end of the main set. Two shows later in Köln, after seeing complaints on LPLive about the lack of setlists changing, LP swapped up "Papercut" and "The Messenger" in the setlist for "Lying From You" and "Leave Out All The Rest" - a change they'd rotate in an out over the next few shows. In the middle of five UK shows, the guys took a break from the tour to fly to Madrid, Spain for the MTV EMA's on November 7th, where they performed an extensive rehearsal (at least 10 songs) in front of thousands of fans before playing a full on 20 song set. The show was later released as part of the A Thousand Suns+ CD/DVD. On the 9th in Birmingham, UK, a fan (Chris) was brought on stage to play guitar on "Crawling" - the first time a fan had been brought up to play guitar since the first show of the Minutes To Midnight touring cycle in Berlin in 2007.

The first LPU Summit of the year, a new feature for LP Underground members, fell on the 10th and 11th of November at London's O2 Arena, a venue where the band played two shows back-to-back in 2008 as well. The night of the 11th featured an entirely new setlist that opened with "Fallout" and "The Catalyst" and had the entire order shaken up. One big highlight from the Summit was when Mike invited two fans from the Summit "jam session" on stage to play guitar on "Faint" to close the main set! Fans earlier in the day were also treated to acoustic performances of "Leave Out All The Rest" (Mike and Chester) and "The Messenger" (Brad and Chester) before watching a five song rehearsal by the band. With a successful first LPU Summit under their belts, the band stopped off in Abu Dhabi on November 13th to play the Formula 1 Grand Prix (a show they'd later also play in Singapore in 2011) and in Tel Aviv, Israel on the 15th. It was the first time the band had played either country. To celebrate the last show of the "tour" in Tel Aviv, Chester sang over a minute of Bob Marley's "No Woman, No Cry" during the intro to "The Messenger".

After a month off, Linkin Park ended 2011 by playing 9 shows in Australia. New setlists were debuted at the shows and fan-favorites "Blackout" and "Burning In The Skies" came at the 7th show of the tour, a second night in Melbourne. Fans were routinely brought up to play guitar on the tour and one fan named "Pez" even was brought up twice (two shows) to play "Faint" - the second time being at the second LPU Summit of the year at the second Sydney show of the tour (enough "seconds" yet?). His brother Brad was also brought up to play Phoenix's bass (the first time a fan has been invited to do so) on the song. Although this was a "scaled down" Summit and was only on one day instead of two, fans were treated to acoustic performances of "The Messenger" (Chester) and "The Little Things Give You Away" (Mike and Chester) and other opportunities that were included in the first LPU Summit - walking on the stage before the show, etc.